History of the Establishment Clause

The historical reasons for this amendment are evident from English and colonial history, where at times, one religion was favored over others. For example, at alternating times, the official religion of England was Catholicism or Protestantism. People who dissented from the prevailing religion were often punished, taxed, imprisoned, tortured and killed for not conforming.

In early America, most colonial governments had state supported religions. Tax dollars were used to support the state church. Some colonies had laws requiring church attendance. Punishments were meted out to those who did not agree with the tenets and practices of the state church. Generally, Puritanism prevailed in northern colonies and Anglicanism prevailed in the South. Baptists were persecuted in some places, Catholics in others and Quakers in still others.

By the time the Constitution was created, many Americans had had enough of the state telling them what they had to believe or how they could or could not express their faith. Many called for an amendment to the Constitution that would specifically say that all Americans were guaranteed freedom in their religious choices. This meant they could believe how they chose and express their belief in the way they chose, even if they chose not to believe in a God at all. This is such a widely held belief today that few would challenge this idea.

Problems have arisen though in the process of determining exactly what the restriction of the government from "establishing a religion" means. For example, does it mean that students cannot pray at school because the school is a state run institution? Does it mean that cities cannot display Nativity scenes at Christmas because it would appear that the state is endorsing Christianity? Is government money earmarked to go toward education "establishing a religion" if the student receiving its benefit wants to go to a religious school?

All of these issues and many others have been discussed and argued about throughout American history, but especially in the last 60 or so years, when challenging religious expression of any kind became more in vogue. Most of the court cases involving the "establishment of religion" in recent years have had to do with religious expression in the public schools. 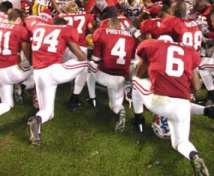 There are two general camps on this Establishment Clause issue. One camp is the accommodationist camp. They believe that accommodations must be made for the huge role that religion plays in the lives of most Americans. For example, they would say that if the majority of the students want to pray before a football game, then they should be allowed to do so. It is their right to pray if they want to.

The other camp is the separationist camp. They believe that there cannot be any mixing between state and religious activities whatsoever on any grounds whatsoever. They would say that even if all the students wanted to pray before the football game, they should not be allowed to because the school sponsoring the event is a state run institution, and allowing them to pray at a state sponsored event would be promoting the students' religion.


It should be noted that there is a fine line between the promotion of religious values that are beneficial to society and forcing some people to participate in religious beliefs that they do not agree with. Many people, for example, want to pray to God and consider prayer to God to be a beneficial thing. Some people though, who may not believe in God, or who believe in another religious system, such as Buddhism, may not want to pray, or to be influenced by the prayer of others, so forcing them to listen to the prayers of others while they are at a state sanctioned event may not be fair. On the other hand, if a person wants to pray to God, shouldn't he have the right to do it, even if someone else doesn't like it?

This sword can cut both ways. Most Americans want their own religion to be favored in public policy, but do not want the state imposing religious ideas on them. But by favoring their own religion over others, they are automatically imposing their beliefs on others who disagree. It is something to think about!

In general, the courts' current interpretation of the Establishment Clause is that people may express their own religious beliefs even when they are in state sanctioned events or places, but that the state institutions themselves may not promote any set of religious values over another.

The courts have ruled though that complete exclusion of religious subjects by the state is not necessary, as long as one is not being promoted over another. So, by this standard, a city may display a Christian themed decoration at Christmas time, if it is included with other non-religious decorations, because the intent of the display is to recognize the holiday season and not to specifically promote Christianity. If, however, the city were to display a Christian symbol only, it would have the appearance of promoting Christianity, and this would not be allowed. 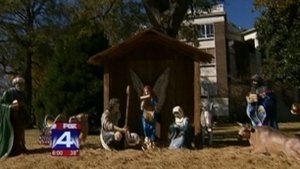 Nativity Scene at the Courthouse in Athens, Texas

For example, in the picture to the left, this nativity scene at the Courthouse in Athens, Texas was challenged by a group of atheists in December, 2011. The suit said the presence of the nativity scene violated the Establishment Clause and would alienate non-Christians and make them feel unwelcome there. The judge threw out the case because the Courthouse also displayed secular symbols such as elves, a Christmas tree and Frosty the Snowman.

Importance of the Establishment Clause

The Establishment Clause is very important in American life. Without it, the government would be allowed to tell you exactly what you must believe and how you should express that belief. It would be fine if people who believed just like you were in power and made laws that favored your beliefs, but what about everyone else? What if one person wanted to pray standing up and the other wanted to pray sitting down? What if one wanted to go to church on Sunday, one on Saturday and one didn't want to go at all? Should they be forced to do something they didn't want to in regard to their religious beliefs? Most people clearly do not want the government telling them what they have to believe. Instead, they want to believe and act in accord with their own conscience.

This link will take you to a complete list of cases having to do with the Establishment Clause that have come before the Supreme Court.

Read more about the history and meaning of the 1st Amendment here.

Learn more about the other 1st Amendment clauses: