Freedom of the Press Clause

"Congress shall make no law... abridging the freedom... of the press."

History of the Freedom of the Press Clause

In 1735, a case involving John Peter Zenger erupted. Zenger was the publisher of the New York Weekly Journal. Zenger's publication distributed the views of several local people who were critical of the royal governor. The Royal Governor had Zenger arrested and tried for seditious libel. 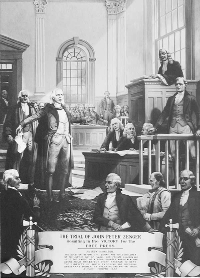 The Trial of John Peter Zenger

Nonetheless, Zenger's attorney did convince the jury and he was acquitted. Ever since that time, those who criticize the government have generally been allowed to do so with no fear of prosecution. Royal governments after this still retained the right to prosecute seditious libel cases and occasionally did so, but it became more and more rare.

Applying the Freedom of the Press Clause

There are generally a few limitations on the freedom of the press. The press is usually prevented from publishing anything regarded as a state secret or anything that would endanger national security. The press is also prevented from libeling people, meaning promoting intentionally false information about someone that would damage his reputation. The Supreme Court has also ruled that there must be intentional malice to justify a libel charge. The Court has also said that public figures and public officials cannot charge with libel someone who criticizes them or publishes something derogatory about them (without malice).

In the past, the Freedom of the Press Clause was only applied to printed materials, but with the proliferation of electronic media in the modern age, these freedoms are also extended to electronic media formats such as television, radio and internet. Generally television is not allowed quite as much freedom as print or internet because there are only a limited number of frequencies available that must be regulated by the government. Freedom of the printed word is still limited in many places in the world today, such as in countries dominated by Sharia Law, but it has been, historically, difficult for governments to regulate electronic communications that can be sent through the airwaves into their jurisdictions from outside.

On a related topic, to access a history of Post 9/11 Freedom of Information Rulings and Acts of Congress go here.