The Freedom of Assembly Clause

"Congress shall make no law... abridging...the right of the people peaceably to assemble..."

This is the only one of the amendments of the Constitution that the founders spoke of with such a strong qualifying word - that is that the right can only be exercised if done peaceably. In other words, if a group was assembling to start a riot or to overthrow the government, they could not claim a right to do this guaranteed by the Constitution, because they were not assembling in peace.

History of the Freedom of Assembly Clause

The importance of the Freedom of Assembly to the Founding Fathers stretched back into pre-colonial American history. The English monarchy often restricted the right of English citizens to assemble in public. Monarchies often fear the assembling of groups of people for fear that they might try to overthrow the government.

In 1670, Quaker William Penn, the later founder of Pennsylvania, was convicted in England for public preaching. Part of the case against him was that he was gathering unlawful assemblies in public. A jury later found him innocent, but this was an important moment in the thought process that many British citizens had about the right to assemble.

British colonists in America brought their ideas about freedom with them to the new world. During the time preceding the Revolutionary War, the British army began to try to restrict colonists from assembling to protest the various Acts Parliament had passed to tax and control the colonial population.

Because of this, the advocates of American liberty began to see that the right to assemble was of key importance to those who wanted to correct wrongs done by their government. If they could not assemble, they could not achieve their goals.

Consequently, the delegates to the First Continental Congress added a statement about the right to assemble in the document they published called "Declaration and Resolves" on October 14, 1774, that said the people "have a right to peaceably assemble, consider of their grievances, and petition the king." This document listed the grievances the American people had against King George III and Parliament, their objections to the various acts passed by Parliament, known as the Intolerable Acts and stated the rights they believed they were entitled to. You can read Congress' Declaration and Resolves of October 14, 1774 here.

Several states included protections for the right to assemble in their constitutions as the new nation began to emerge. The First Congress added protection for the right to assemble in the Bill of Rights' First Amendment to the Constitution which became law in 1791. You can read more about the history of the Bill of Rights here.

Interpretation of the
Freedom of Assembly Clause 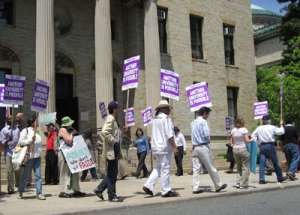 The Freedom of Assembly Clause has often been used in American history by groups that want to effect social change, such as civil rights groups, women's suffrage (the right to vote) groups and labor unions. They have all successfully argued that they have the right to assemble based on the Freedom of Assembly Clause in the First Amendment, even though these groups were sometimes at odds with government officials who wanted to limit their speech and their ability to meet, organize and conduct business.

Freedom of Association is defined as the right of people to meet together to further their common goals. Furthering their goals might include such things as organizing their efforts, marching, picketing or gathering in public places.

The right to assemble is not an absolute right. There are some restrictions on this right as there are with other rights. The right to assemble is not as strongly protected by the government as other rights, such as the freedom of speech. This is because groups that assemble often do so, not with just speech, but with some type of conduct, such as picketing, protesting, marching or gathering in a park, which may disrupt the peace.

The courts have ruled that, while it is the responsibility of the government to protect the people's right to assemble, it is also the government's responsibility to keep the peace. Because of this, the courts have allowed governments to make reasonable restrictions on the time, place and manner of these assemblies. The government may place restrictions on the right to assemble that will maintain law and order, facilitate traffic, protect private property and reduce noise congestion.

The courts allow these restrictions, as long as the restrictions are not aimed at squelching a particular group's free speech because it is unpopular or not liked. Reasonable restrictions would include such things as requiring permits to hold a large public gathering in a park or to hold a parade downtown, making local curfews for teenagers or preventing protesters from holding up traffic.

Freedom of Assembly cases before the Supreme Court have often involved labor unions. Many localities, especially during the early 20th century had restrictions on the meeting of labor unions. This was partly due to some labor unions' contacts with the Communist Party. The Supreme Court eventually clarified that people had the right to assemble in labor unions even if their view was not popular or liked by officials, as long as they were not disrupting the peace or actively involved in trying to overthrow the government.

There are several interesting First Amendment Supreme Court cases involving the Freedom of Assembly Clause. One well known case is called Boy Scouts of America vs. Dale. In this case, which was ruled upon in 2000, the Supreme Court said that the Boy Scouts could not be forced to include an openly homosexual scoutmaster required by a New Jersey public-accommodation law. The public-accommodation law required equal treatment of heterosexuals and homosexuals. The court ruled that this would force the organization to repudiate its own belief system. In general, the court does not allow organizations to be forced into advocating something they oppose. This could be considered the Freedom not to Assemble with people one does not want to assemble with.

In a similar case called Hurley vs. Irish-American Gay, Lesbian & Bisexual Group, in 1995, the Court ruled that the South Boston Allied War Veterans Council could not be forced to allow openly homosexual marchers in its St. Patrick's Day parade under that state's public-accommodation law. The Court said this would undermine the group's own religious agenda.

Another famous Freedom of Assembly Clause case is called NAACP vs. Alabama, which was ruled upon in 1958. In this case, the Supreme Court ruled that the state could not force the NAACP to turn over its membership list under a statute that required the membership lists of out-of-state corporations be turned in to the government. The Court's reason was that forcing this action would seriously endanger the group's ability to get out its message. This was a time of high racial tension and members, if publicly exposed, would likely suffer retribution, which would stifle their ability to get out their message of racial equality.

The Court often uses a policy called "strict scrutiny" when judging Freedom of Assembly cases. Under this policy, the law that is being challenged is examined to see if its restriction upon someone's right to freely assemble is somehow justified by a larger government concern. If the government cannot justify the restriction with a larger concern, the law would be considered unconstitutional.

This is the same reasoning behind the Boy Scouts of America vs. Dale and Hurley vs. Irish-American Gay, Lesbian & Bisexual Group rulings. The Court was ruling the governments' public-accommodation laws were not sufficiently compelling to restrict the Boy Scouts and the War Veterans' Council from assembling with only those they chose to, partly because requiring them to do so in this case would have forced them to renounce their religious stand against homosexuality.

On the other hand, sometimes the Court does allow the government to force assemblies which someone may not like. For example, in Roberts vs. United States Jaycees, in 1984, the Supreme Court ruled that a Minnesota law outlawing gender discrimination could be used to force the local Jaycees to admit women into its membership, a privilege that was traditionally only allowed to men. The Court said that the group's openly stated educational and charitable mission was not undermined by the inclusion of women. The Court reached the same conclusion in Board of Directors of Rotary International vs. Rotary Club of Duarte, a 1987 case that forced the Rotary Club of Duarte, California to include women in its membership.

In these cases, the Court has determined that the government may restrict a group's right to freely assemble only if there is a larger compelling interest by the government, such as prohibiting discrimination against women, and the action of the government would not somehow sabotage the group's message.

Here is an interesting question: What would happen if a homeowner association would declare that its mission was to segregate the races and would only allow white people in its neighborhood? The homeowner association is a group that can freely assemble, but preventing racial discrimination is also deemed a high priority by the government. Restricting the group's efforts to segregate a neighborhood would directly affect the group's ability to assemble according to its own belief system. The Court has yet to rule on a case like this.