On this day in history, January 28, 1779, Fort Nashborough, now called Nashville, is founded during the American Revolution in response to Indian attacks on settlers in the area. After the Revolution began, many Cherokee and other tribes in the southeast joined the British against the Americans. Their motivation was to stop the American settlers' encroachment on their land.

The Cherokee, especially, played a huge role in the Revolution, particularly in Georgia and South Carolina. Not all Cherokee sided with the British, however. Many remained neutral and some were on the side of the Americans. Chief Dragging Canoe was the principal anti-American and anti-settler chief in the region.

Dragging Canoe led numerous attacks on settlements throughout what is now Tennessee and Kentucky, Virginia, Georgia and North and South Carolina. This conflict between American settlers and Chief Dragging Canoe and his allies stretched from 1776 when the Revolution began, to 1794 when peace was finally reached between the two sides. The whole time period is called the "Chickamauga Wars" and is named after the Chickamauga River where Dragging Canoe settled and had his base of operations. 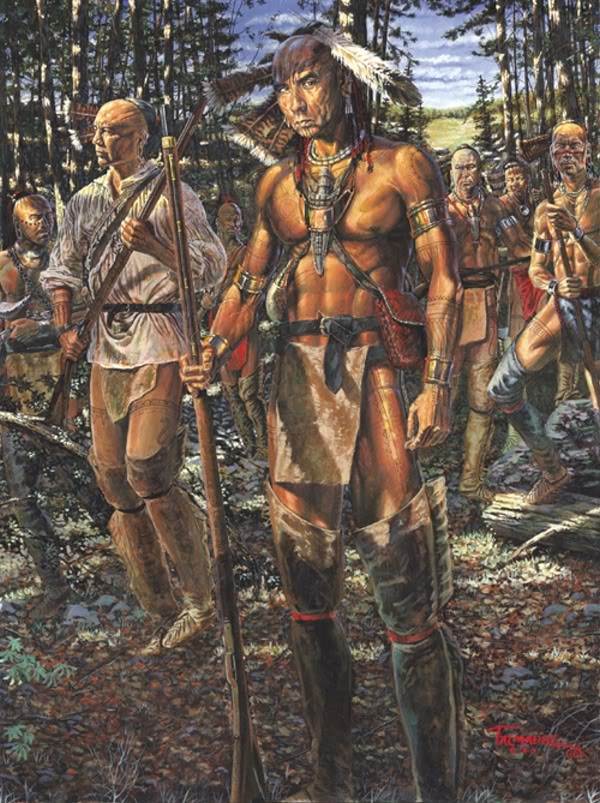 What is now known as Tennessee was part of North Carolina at the outbreak of the Revolution. The mid-section of modern Tennessee had no permanent white settlements up to this point, although the region had been traveled thoroughly by traders and explorers. In 1775, Judge Richard Henderson of North Carolina purchased about two million acres of land from the Cherokee in what is now Kentucky and Tennessee, including the Nashville area. Dragging Canoe was firmly against the sale and mounted attacks on settlers coming into the area. Henderson's original plan was to create a 14th state known as Transylvania in the region, but the plan fell apart when Congress and the state of Virginia did not recognize the claim.

In early 1779, James Robertson and John Donelson brought the first white settlers to an area on the Cumberland River known as "French Lick." The name came from a previous French trading post nearby and from naturally occurring salt in the ground that animals would "lick," called a "salt lick." On January 28, 1779, the settlers built a 2 acre fort called Fort Nashborough, named after General Francis Nash, a North Carolina General who died at the Battle of Germantown.

Fort Nashborough would be renamed Nashville within a few years (to get rid of the British sounding "borough") and would suffer numerous Indian attacks for the next decade and a half until Dragging Canoe died in 1792. After this, his Indian coalition fell apart, a peace treaty was signed with the Cherokee and much of the remaining resistance was put down by the American army.

A reconstructed Fort Nashborough was built in downtown Nashville in 1930 by the Daughters of the American Revolution. The fort still stands today and has buildings constructed in the same way they were in the original fort. The fort is open for self-guided tours year round and has period actors appearing there at certain times to teach about frontier life.