The Grand Jury Exception Clause excludes people in the armed forces from the right to indictment by a grand jury. The first part of the Fifth Amendment, known as the Grand Jury Clause, requires that federal charges for serious crimes must come by the indictment of a grand jury, not from a prosecutor alone. This right is not granted to military personnel or members of the militia, or national guard, though. The Grand Jury Exception Clause reads like this, in bold:

"No person shall be held to answer for a capital, or otherwise infamous crime, unless on a presentment or indictment of a Grand Jury, except in cases arising in the land or naval forces, or in the Militia, when in actual service in time of War or public danger."

After the Revolutionary War, the Founding Fathers began to establish a new government that was eventually enshrined in the Constitution of the United States. There was a lot of disagreement about how much power the federal government should have and how much power should be retained by the states. You can read more about this disagreement at our Purpose of the Purpose of the Bill of Rights page here.

"The Congress shall have power... To make Rules for the Government and Regulation of the land and naval Forces."

It is clear that the framers wanted to keep control of the military in the hands of the people and not the executive or the judiciary. Why would they do this? Three reasons are evident. For one, the framers did not want a handful of unelected judges to have power over the military, who might use it for personal advantage. This could easily lead to a military dictatorship, which is what they had just defeated during the Revolutionary War. Instead, they wanted control of the military spread out amongst a large group of citizens. This way, it would be much harder for a corrupt person to take over. 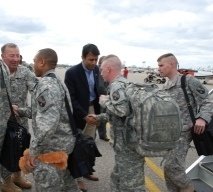 The second reason for giving Congress complete control over regulating the military, was to ensure that the military would remain strong. They didn't want a handful of unelected judges to weaken the military right at the time when it was most needed. Instead, they wanted the people to be in charge through their representatives in Congress, who would recognize threats and respond with force if necessary. They also recognized that the functioning of the military is so important to guarding the peace, that they didn't wanted a small group of unelected judges meddling with the operation of the most powerful force in the nation. It was very important to the framers to keep absolute control over the military in the people's hands.

A third reason to keep civilian courts out of military matters is that it would be very unwise to allow courts and judges, who are far removed from the scenes of war, to determine what is proper action on the battlefield. For example, if a soldier killed an enemy during a battle it could be viewed by one person as a justified action in combat. Someone else might look at it and say, the soldier shouldn't have killed the enemy because the enemy had laid down his gun and was going to surrender. In the heat of the battle, decisions might be made by a soldier that would not be made under normal circumstances.

The Founders left judgments like this up to military rather than civilian courts. Civilian juries and civilian judges would have a hard time understanding battlefield conditions and pressures. If soldiers thought they could be tried in a civilian court when they get home for doing something they thought was justified on the field of battle, many soldiers would begin holding back, putting their lives and the lives of their friends in danger. 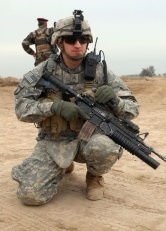 All American citizens are guaranteed the right to an indictment by a grand jury for serious federal crimes by the 5th Amendment, except for military personnel. Military personnel, whether on active duty or not, and members of the militia, which is today's national guard, cannot be indicted by a federal court. They must be charged in a military court. The military court has a whole different set of rules by which it functions that is not determined by the judiciary, but by the Congress and the military.

If you have ever seen the tv show "JAG," you have a seen a depiction of a military court. The JAG (which stand for Judge Advocate General) officers represented are trying military cases. If you have seen the show, you know that civilians are never tried there, only military personnel. Military personnel have an entirely separate court system.

Due to their desire to keep control over the military within the Congress' hands, the Founding Fathers created the Grand Jury Exception Clause in the 5th Amendment that specifically excludes military members from the right to indictment by grand jury.

Practically speaking, if a member of the armed services is charged with a crime, while he is actively serving, or even if he is off duty, he must be tried by a military court and not in a civilian court. The military court is not required to use the grand jury process, like civilian federal courts are. If a person is serving in the militia, which is today's national guard, he also will be tried in a military court, whether actively serving or off duty.

The Uniform Code of Military Justice grants accused personnel the right to be informed of the charges against them, the right to have an attorney, protection from double jeopardy and self-incrimination, virtually all the rights given in a civilian court, except those specifically mentioned in the Constitution or inapplicable in a military setting.

You can read about several interesting and significant Fifth Amendment Court Cases dealing with the Grand Jury Exception Clause here.

Return to the 5th Amendment here.