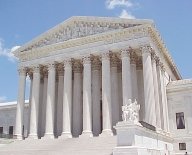 In a 1950 case called Johnson vs. Eisentrager, the Supreme Court ruled that captured enemy soldiers, who were not citizens of the United States, could not challenge their detention in American courts. Some German World War II prisoners had tried to challenge their detention in civilian American courts after they had been tried and convicted by a military court. The case is particularly interesting because of the current day issue regarding whether or not enemy combatants captured in America's "War on Terrorism" can be allowed to appeal their detention in US civil courts. The Rasul vs. Bush case deals with this in more detail below.

The Court ruled that foreign enemies have no more rights than Americans do. They reasoned that "American citizens conscripted into the military service are thereby stripped of their Fifth Amendment rights and as members of the military establishment are subject to its discipline, including military trials for offenses against aliens or Americans." So, the Court was saying that the military has a well established system of trying its own members and foreign enemy prisoners who are in its custody have no greater rights than the military personnel themselves.

All cases involving the trying of military personnel are handled in military courts, but there are a few exceptions in cases of appeal. For example, some cases can be appealed to the Supreme Court. Federal judges sometime rule on whether or not a military tribunal has jurisdiction in a particular case.

The Supreme Court created a new "right" for military personnel to use federal courts in Burns vs. Wilson, 1953. Military personnel do not claim the same free speech protections that civilians claim because of the nature of the military. Certain forms of disrespectful or contemptuous speech would be harmful to the military's mission.

Further, in 2004, the Supreme Court ruled in Rasul vs. Bush that federal district courts could hear challenges by detainees held at America's Guantanamo Bay military base. This remains a very controversial decision in the eyes of many observers. This is the first time that foreign enemies have been granted the right to appeal military punishments outside of the military courts in American history. Many people argue that foreign citizens do not have the rights given to American citizens in the Constitution. Some people say that they should have those rights, whether the Constitution says so or not.

In another "War on Terrorism" case, Hamdi vs. Rumsfeld, 2004, the Supreme Court declared that a US citizen who is being held as an enemy combatant by the military must be allowed to challenge his detention in civil courts. In this case, an American citizen was found to be cooperating with the Taliban in Afghanistan. The Court overruled the government's claim that he should be held as an enemy combatant and instead he must be given the same privileges and rights given to any citizen charged with a crime. You can read more about the Hamdi case here.