One of the most famous 5th Amendment Double Jeopardy Clause cases is the case of Jack McCall, the murderer of Wild Bill Hickok. McCall shot Hickok in the back of the head in a saloon in Deadwood, South Dakota, apparently because he was insulted the day before when Hickok offered to pay for McCall's breakfast. McCall had lost all his money in a poker game the night before.

The Double Jeopardy Clause does not prevent a new trial if the first trial was found to somehow be tainted by fraud. For example, in Harry Aleman vs. Judges of the Criminal Division, Circuit Court of Cook County, Illinois, et al., 1998, it was found that the defendant had bribed the judge into not convicting him. The Supreme Court said to retry the case would not be a violation of the Double Jeopardy Clause because the bribery had protected him from ever being in jeopardy in the first place.

A person cannot be convicted for the same crime twice unless he has violated more than one law. In the case United States vs. Felix, 1992, the defendant had committed one actual crime, but was convicted for breaking two laws. One conviction was for the actual crime and the second was for conspiracy to commit the same crime. These were violations of two separate laws. The Supreme Court held that the Double Jeopardy Clause was not violated because two different laws were broken, for which the defendant was tried only once for each law violation.

If a person has violated more than one law with only one criminal act, the Double Jeopardy Clause applies in some cases, and in some cases it does not. For example, if a person was tried and convicted of assault, he could not later be tried, using the exact same evidence, for murder. He could however, be tried later for murder, if new evidence came to light in addition to the evidence from the first trial. He would be tried for two separate crimes, with two separate sets of evidence. If he was tried for both crimes, in two separate trials, using the same evidence, it would be a violation of the Double Jeopardy Clause, because he was tried twice with the same evidence. 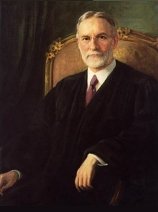 This is known as the Blockburger test and it is derived from Blockburger v. United States, 1932. It states basically that a person cannot be tried for lesser and greater crimes using the same evidence in subsequent trials. A person can be tried on lesser and greater crimes using the same evidence if the crimes are tried together in one trial. This does not constitute double jeopardy because the defendant is not tried twice using the same evidence. The Blockburger test, as written in the Court's unanimous ruling by Justice George Sutherland, can be explained as follows: "The test to be applied to determine whether there are two offenses or only one, is whether each provision requires proof of an additional fact which the other does not."

In a case called Fong Foo vs. United States, 1962, the Supreme Court ruled that a case could not be retried, even if the lower court judge had made serious errors in his decisions. In this case, a judge ordered the jury to acquit the defendant, believing that the conduct of the United States District Attorney had been improper and that the witnesses had lacked credibility. This decision was appealed by the government. The Appeals Court then ruled that a retrial could take place, saying that the judge did not have legal power to tell the jury what to do in this case.

The Supreme Court reviewed the case and disagreed with the Appeals Court. It recognized that the original judge had been wrong in his decision, but also said that the jury had acquitted the defendant. This was a final judgment and the trial had been officially closed. The Court judged that a retrial, in spite of the original judge's errors, would be a violation of the Double Jeopardy Clause.

Read more about the history and meaning of the Double Jeopardy Clause here.