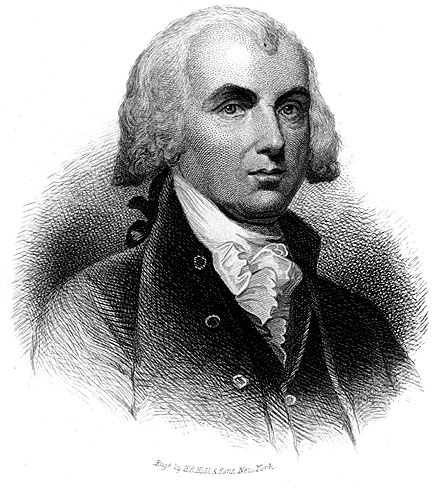 These James Madison Quotes are listed chronologically and taken from Madison's own writings. The quotes on this page are from the year 1788 and are all taken from the Federalist Papers No.'s 48-55. The Federalist Papers were a series of articles written by Madison, John Jay and Alexander Hamilton to inform the American people about the new Constitution and encourage them to adopt it. These James Madison Quotes cover such topics as the nature of tyranny, the necessity of separation of power in government and the importance of having knowledgeable officials. These James Madison Quotes are listed chronologically and there are links to more both before and after this time period at the bottom of the page.

"A local spirit will infallibly prevail much more in the members of Congress than a national spirit will prevail in the legislatures of the particular States." - Federalist Papers, No. 46, January 29, 1788

"No political truth is certainly of greater intrinsic value, or is stamped with the authority of more enlightened patrons of liberty than that on which the objection is founded. The accumulation of all powers, legislative, executive, and judiciary, in the same hands, whether of one, a few, or many, and whether hereditary, self-appointed, or elective, may justly be pronounced the very definition of tyranny." - Federalist Papers, No. 47, February 1, 1788

"One hundred and seventy-three despots would surely be as oppressive as one." - Federalist Papers, No. 48, February 1, 1788

"Besides the advantage of being armed, which the Americans possess over the people of almost every other nation, the existence of subordinate governments, to which the people are attached and by which the militia officers are appointed, forms a barrier against the enterprises of ambition, more insurmountable than any which a simple government of any form can admit of." - Federalist Papers, No. 48, February 1, 1788

"It will not be denied that power is of an encroaching nature and that it ought to be effectually restrained from passing the limits assigned to it. After discriminating, therefore, in theory, the several classes of power, as they may in their nature be legislative, executive, or judiciary, the next and most difficult task is to provide some practical security for each, against the invasion of the others." - Federalist Papers, No. 48, February 1, 1788

"In the next place, to show that unless these departments be so far connected and blended as to give to each a constitutional control over the others, the degree of separation which the maxim requires, as essential to a free government, can never in practice be duly maintained." - Federalist Papers, No. 48, February 1, 1788

"The legislative department is everywhere extending the sphere of its activity and drawing all power into its impetuous vortex." - Federalist Papers, No. 48, February 1, 1788

"An ELECTIVE DESPOTISM was not the government we fought for; but one which should not only be founded on free principles, but in which the powers of government should be so divided and balanced among several bodies of magistracy, as that no one could transcend their legal limits, without being effectually checked and restrained by the others." - Federalist Papers, No. 48, February 1, 1788

"It may be considered as an objection inherent in the principle, that as every appeal to the people would carry an implication of some defect in the government, frequent appeals would in great measure deprive the government of that veneration which time bestows on every thing, and without which perhaps the wisest and freest governments would not possess the requisite stability." - Federalist Papers, No. 49, February 5, 1788

"The members of the legislative department... are numerous. They are distributed and dwell among the people at large. Their connections of blood, of friendship, and of acquaintance embrace a great proportion of the most influential part of the society... they are more immediately the confidential guardians of their rights and liberties." - Federalist Papers, No. 50, February 5, 1788

"Justice is the end of government. It is the end of civil society. It ever has been and ever will be pursued until it be obtained, or until liberty be lost in the pursuit." - Federalist Papers, No. 51, February 8, 1788

"A representative of the United States must be of the age of twenty-five years; must have been seven years a citizen of the United States; must, at the time of his election, be an inhabitant of the State he is to represent; and, during the time of his service, must be in no office under the United States. Under these reasonable limitations, the door of this part of the federal government is open to merit of every description, whether native or adoptive, whether young or old, and without regard to poverty or wealth, or to any particular profession of religious faith." - Federalist Papers, No. 52, February 8, 1788

"In a society under the forms of which the stronger faction can readily unite and oppress the weaker, anarchy may as truly be said to reign as in a state of nature." - Federalist Papers, No. 52, February 8, 1788

"No man can be a competent legislator who does not add to an upright intention and a sound judgment a certain degree of knowledge of the subjects on which he is to legislate. A part of this knowledge may be acquired by means of information which lie within the compass of men in private as well as public stations. Another part can only be attained, or at least thoroughly attained, by actual experience in the station which requires the use of it. The period of service, ought, therefore, in all such cases, to bear some proportion to the extent of practical knowledge requisite to the due performance of the service." - Federalist Papers, No. 53, February 12, 1788

"We must deny the fact, that slaves are considered merely as property, and in no respect whatever as persons. The true state of the case is, that they partake of both these qualities: being considered by our laws, in some respects, as persons, and in other respects as property. In being compelled to labor, not for himself, but for a master; in being vendible by one master to another master; and in being subject at all times to be restrained in his liberty and chastised in his body, by the capricious will of another, the slave may appear to be degraded from the human rank, and classed with those irrational animals which fall under the legal denomination of property. In being protected, on the other hand, in his life and in his limbs, against the violence of all others, even the master of his labor and his liberty; and in being punishable himself for all violence committed against others, the slave is no less evidently regarded by the law as a member of the society, not as a part of the irrational creation; as a moral person, not as a mere article of property." - Federalist Papers, No. 54, February 12, 1788

"As there is a degree of depravity in mankind which requires a certain degree of circumspection and distrust: So there are other qualities in human nature, which justify a certain portion of esteem and confidence. Republican government presupposes the existence of these qualities in a higher degree than any other form. Were the pictures which have been drawn by the political jealousy of some among us, faithful likenesses of the human character, the inference would be that there is not sufficient virtue among men for self-government; and that nothing less than the chains of despotism can restrain them from destroying and devouring one another." - Federalist Papers, No. 55, February 15, 1788