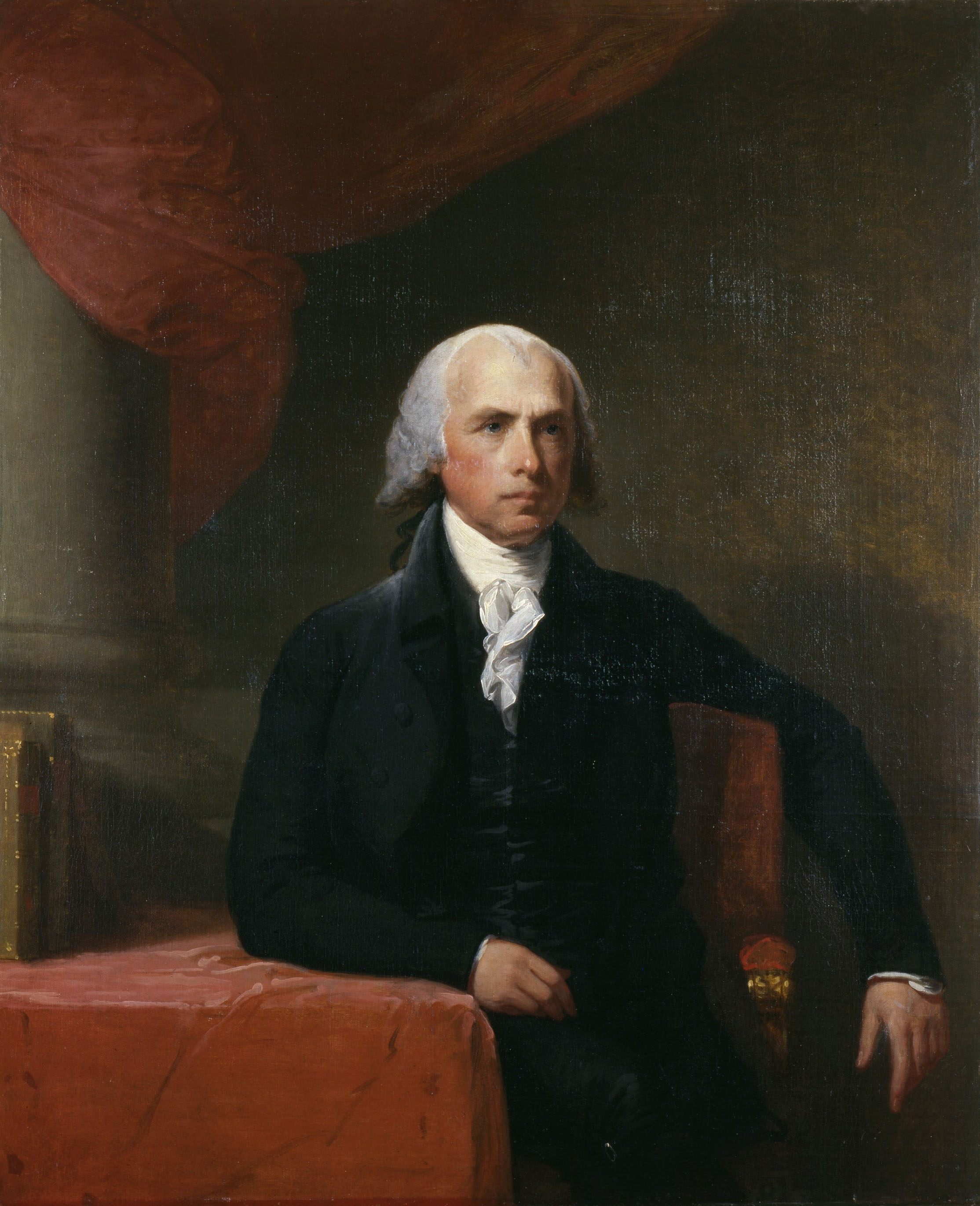 "We are teaching the world the great truth that Governments do better without Kings & Nobles than with them. The merit will be doubled by the other lesson that Religion Flourishes in greater purity, without than with the aid of Government." - Letter to Edward Livingston, July 10, 1822

"A popular Government without popular information, or the means of acquiring it, is but a Prologue to a Farce or a Tragedy, or perhaps both. Knowledge will forever govern ignorance: And a people who mean to be their own Governors, must arm themselves with the power which knowledge gives." - Letter to W. T. Barry, August 4, 1822

"Learned institutions ought to be favorite objects with every free people. They throw that light over the public mind which is the best security against crafty and dangerous encroachments on the public liberty." - Letter to W. T. Barry, August 4, 1822

"A knowledge of the Globe and its various inhabitants, however slight... has a kindred effect with that of seeing them as travellers, which never fails, in uncorrupted minds, to weaken local prejudices, and enlarge the sphere of benevolent feelings." - Letter to W. T. Barry, August 4, 1822

"What spectacle can be more edifying or more seasonable, than that of Liberty and Learning, each leaning on the other for their mutual & surest support?" - Letter to W. T. Barry, August 4, 1822

"I will sketch for your consideration a substitute which has occurred to myself for the faulty part of the Constitution in question: "The electors to be chosen in districts, not more than two in any one district... Each elector to give two votes, one naming his first choice, the other his next choice. If there be a majority of all the votes on the first list for the same person, he of course to be President; if not, and there be a majority... on the other list for the same person, he then to be the final choice; if there be no such majority on either list, then a choice to be made by joint ballot of the two Houses of Congress from the two names having the greatest number of votes on the two ballots taken together." ...The same process might be observed in electing the Vice President." - Letter to George Hay, August 23, 1823

"I entirely concur in the propriety of resorting to the sense in which the Constitution was accepted and ratified by the nation. In that sense alone it is the legitimate Constitution. And if that be not the guide in expounding it, there can be no security for a consistent and stable, more than for a faithful, exercise of its powers. If the meaning of the test be sought in the changeable meaning of the words composing it, It is evident that the shape and attributes of the government must partake of the changes to which the words and phrases of all living languages are constantly subject. What a metamorphsis would be produced in the code of law if all its ancient phraseology were to be taken in its modern sense!" - Letter to Richard Henry Lee, June 25, 1824

"The eyes of the world being thus on our Country, it is put the more on its good behavior, and under the greater obligation also, to do justice to the Tree of Liberty by an exhibition of the fine fruits we gather from it." - Letter to James Monroe, December 16, 1824

"In our complex system of polity, the public will, as a source of authority, may be the will of the people as composing one nation, or the will of the States in their distinct and independent capacities; or the federal will as viewed, for example, through the presidential electors, representing in a certain proportion both the nation and the States." - Letter to Henry Lee, January 14, 1825

"The "Federalist" may fairly enough be regarded as the most authentic exposition of the text of the federal Constitution as understood by the Body (the Constitutional Convention) which prepared & and the Authorities (the state ratifying conventions) which accepted it." - Letter to Thomas Jefferson, February 8, 1825

"On the distinctive principles of the Government... of the U. States, the best guides are to be found in... The Declaration of Independence, as the fundamental Act of Union of these States." - Letter to Thomas Jefferson, February 8, 1825

"I still must think... that the text of the Constitution is best interpreted by reference to the tripartite theory of government to which practice has been conformed and which so long and uniform a practice would seem to have established." - Letter to Charles Francis Adams, October 13, 1825

"The belief in a God All Powerful wise and good, is so essential to the moral order of the world and to the happiness of man, that arguments which enforce it cannot be drawn from too many sources nor adapted with too much solicitude to the different characters and capacities to be impressed with it." - Letter to Rev. Frederick Beasley, November 20, 1825

"I congratulate you on the foundation thus laid for a general System of Education, and hope it presages a superstructure, worthy of the patriotic forecast which has commenced the Work. The best service that can be rendered to a Country, next to that of giving it liberty, is in diffusing the mental improvement equally essential to the preservation, and the enjoyment of the blessing." - Letter to Littleton Dennis Teackle, March 29, 1826

"The best service that can be rendered to a Country, next to that of giving it liberty, is in diffusing the mental improvement equally essential to the preservation, and the enjoyment of the blessing." - Letter to Littleton Dennis Teackle, March 29, 1826

"He will live in the memory and gratitude of the wise & good, as a luminary of Science, as a votary of liberty, as a model of patriotism, and as a benefactor of human kind." - Referring to Thomas Jefferson in a letter to Nicholas P. Trist, July 6, 1826

"He was certainly one of the most learned men of the age. It may be said of him as has been said of others that he was a "walking Library," and what can be said of but few such prodigies, that the Genius of Philosophy ever walked hand in hand with him." - Letter to Samuel Harrison Smith (referring to Thomas Jefferson), November 4, 1826

"A construction of the Constitution practised upon or acknowledged for a period of nearly forty years, has received a national sanction not to be reversed but by an evidence at least equivalent to the national will. If every new Congress were to disregard a meaning of the instrument uniformly sustained by their predecessors for such a period, there would be less stability in that fundamental law than is required for the public good in the ordinary expositions of the law. And the case of the Chancellor's foot, as a substitute for an established measure, would illustrate the greater as well as the lesser evil of uncertainty and mutability." - Letter to Joseph C. Cabell, March 18, 1827

"No feature in the aspect of our Country is more gratifying, than the increase and variety of Institutions for educating the several ages and classes of the rising generation, and the meritorious patriotism which improving on their most improved forms extends the benefit of them to the sex heretofore, sharing too little of it. Considered as at once the fruits of our free System of Government, and the true means of sustaining and recommending it, such establishments are entitled to the best praise that can be offered." - Letter to Gulian C. Verplanck, February 14, 1828

"Power, wherever lodged, is liable, more or less, to abuse. In governments organized on Republican principles it is necessarily lodged in the majority..." - Letter to Thomas Lehre, never mailed, August 2, 1828

"The inconsistency is monstrous between the professed veneration for his (Thomas Jefferson's) name and the anxiety to make him avow opinions in the most pointed opposition to those maintained by him in his more deliberate correspondence with others, and acted on through his whole official life." - Letter to W. C. Rives, January 2, 1829

"Men cannot be justly bound by laws, in making which they have no share." - Letter to Joseph C. Cabell, January 5, 1829

"My lengthened observation making me more and more sensible of the essential connexion between a diffusion of knowledge and the success of Republican institutions, I derive pleasure from every example of such associations as that of the "Washington College Parthenon." With my best wishes that its usefulness may equal the laudable views which led to it, I tender my acknowledgements for the honorary membership conferred on me. At my advanced period of life these wishes and acknowledgments are the only proofs I have to give of the value I put on the mark of respect shown me; and the sincerity of them the only value that can entitle them to a favorable acceptance by the Society." - Letter to Samuel S. Lewis, February 16, 1829

"That the leading agency of such a man (Alexander Hamilton), and from a State in the position of New York, should, in a project for severing the Union, be anxiously wished for by its authors, is not to be doubted; and an experimental invitation of him to attend a select meeting may, without difficulty, be supposed. But obvious considerations oppose a belief that such an invitation would be accepted; and, if accepted, the supposition would remain, that his intention might be to dissuade his party and personal friends from a conspiracy as rash, as wicked, and as ruinous to the party itself as to the country." - Letter to John Quincy Adams, February 24, 1829