On this day in history, June 10, 1768, John Hancock's ship Liberty is confiscated for alleged smuggling. Many of the measures of Parliament with which the American colonies were in disagreement were created in order to raise revenue. Smuggling was a vast enterprise in the thirteen colonies and many of Parliament's measures were directed at reducing it. Smugglers evading customs officials and the taxes they enforced reduced the Royal Treasury's income.

On May 9, 1768, a ship owned by John Hancock sailed into Boston Harbor. The following day, the Liberty's goods were inspected and the customs officials suspected Hancock of smuggling. The reason was that the ship only carried 25 barrels of Madeira wine, but it had the capacity for much more. They alleged that Hancock must have unloaded the rest of the cargo during the night before the goods were examined, but they had no evidence. Two customs officials were stationed on the ship during the night and they said nothing was unloaded... at first.

This followed another incident in April during which Hancock's ship Lydia was boarded, also for suspected smuggling. In that incident, Hancock physically had the customs officials removed from the ship because they did not have a proper warrant. Suit was filed against Hancock, but later dropped because of the missing warrant. This may have made Hancock a marked man in the eyes of the humiliated customs officials. 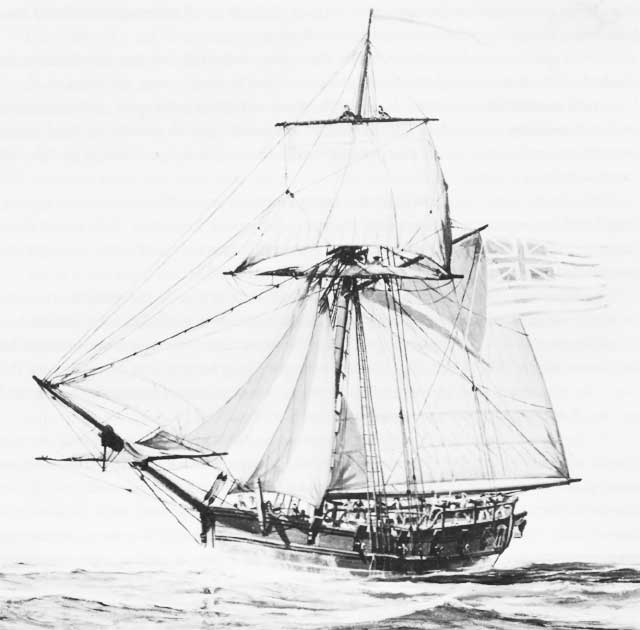 Drawing of a sloop

A month after the original investigation into the Liberty's alleged smuggling, one of the customs officials changed his story, saying some cargo actually had been removed in the night and the officials were forced to remain silent. On June 10, the Liberty was impounded, along with a new shipment of goods already loaded on her. The Liberty was hauled into the harbor and placed under guard by the HMS Romney, a British warship. When the Liberty was confiscated, a riot broke out in Boston. The homes of several customs officials were destroyed, causing several of them and their families to flee to the Romney.

Two suits were filed against Hancock, the first led to the permanent confiscation of the Liberty, which was put into the customs service and later burned by angry Rhode Island residents the following year. The second suit alleged Hancock smuggled wine and charged him for lost customs revenue plus damages. Hancock was represented by a young attorney named John Adams who would one day be president. The suit was finally dropped for lack of evidence.

It should be noted that no evidence has ever surfaced that Hancock was involved in any smuggling at all, even though he has that reputation. Of course, no records would have been kept about smuggling because it was illegal. Boston officials had already been calling for more security as they began enforcing the Townshend Acts. Boston had earned the ire of Parliament by issuing a circular letter calling for all the colonies to resist the Townshend Acts. The Liberty Incident only reinforced Britain's decision to occupy Boston with military troops in October, 1768, to enforce customs laws, protect officials and reign in the rowdy citizens. The occupation would lead to the Boston Massacre in March, 1770.

Return to top of John Hancock's ship Liberty is confiscated