There are a number of Revolutionary War attractions you can visit today in Philadelphia. Tourism of historic Philadelphia attractions might take you to Independence Hall, where the Declaration of Independence was adopted and the US Constitution was drafted, Christ Church, where many Founding Fathers attended church while in Philadelphia and where such Revolutionary War heroes as Benjamin Franklin, Francis Hopkinson, George Ross, Joseph Hewes and Benjamin Rush are buried, or to Carpenters' Hall, meeting place of the First Continental Congress.

And in April of 2017, you'll be able to visit the brand new Museum of the American Revolution!

*This page is only for sites in Philadelphia. Go to this page to add your story if the site is in Pennsylvania, but outside of Philadelphia. 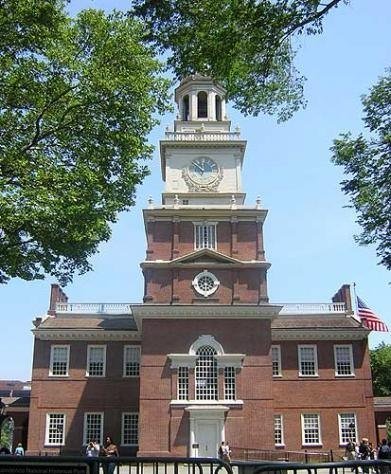 Independence Hall - Philadelphia, where the Declaration of Independence and the US Constitution were adopted

Have a great memory from a Revolutionary War site in Philadelphia?

Did you see or learn something interesting about the Revolutionary War at a site in historic Philadelphia? Tourism in Philadelphia is fun... so why not share your trip with the world? It's free and easy to do. There is no registration required and there is no other obligation on your part.