The Purpose of the
Declaration of Independence

What was the purpose of the Declaration of Independence? Why was it written? What was it supposed to accomplish? On July 2, 1776, the Continental Congress, assembled in Philadelphia, voted to break its ties from Great Britain permanently and irrevocably. Most Americans know about the Declaration and that it announced American freedom from Britain, but the signers had several specific purposes in mind which it was intended to accomplish, besides merely announcing their freedom.

One of the most important was to persuade reluctant colonists to join with them. Many Americans were not yet decided about which side they wanted to be on. Did they want to stay loyal to the British King? Or were they going to risk being labeled traitors by the British government, possibly be put in prison, lose everything they had, or even... suffer death?!

The signers of the Declaration intended to show those who were reluctant to join in the rebellion that loyalty was a lost cause. It was too late for them to save the colonial/mother country relationship. They would have to give up and realize that the colonies would begin to govern themselves.

There were four main purposes of the Declaration of Independence:

Purpose of the Declaration of Independence -
Getting reluctant colonists on board

Many members of the Continental Congress in Philadelphia knew that a lengthy war with Great Britain was inevitable by the spring of 1776. Several battles had already been fought, including the Battles of Lexington and Concord, the Battle of Bunker Hill and the Battle of Ticonderoga. These Founding Fathers knew that the Americans would have to hold together in unison if they were ever going to defeat the powerful British Army.

By May of 1776, the representatives to Congress from the southern colonies and the northern colonies were mostly decided that an absolute break was justified and necessary. The people of the middle colonies were not so sure though. Some of them still wanted to try to reconcile with Britain through diplomatic channels. Some of them believed that a break with Great Britain was inevitable, but also believed that that time had not come yet. For the most part, though, the leaders of the rebellion in Congress thought the populations of the middle colonies would soon be persuaded that independence was necessary.

The representatives in Congress that believed the time for separation had come, wanted a way to clearly state to their brothers the reasons why a break with Great Britain was necessary. One purpose of the Declaration of Independence then, was to boldly state the reasons for separation with Britain, to both their friends and their enemies, to persuade them that the separation was morally justified and that they should join the cause.

Purpose of the Declaration of Independence -
The purpose of government

Why did many of the colonists believe that a break with Great Britain was necessary? One purpose of the Declaration of Independence was to explain their view of the purpose of human government. If you read the text of the Declaration, you will see that the signers believed that all men were created equal by God and that they possess certain unalienable rights. This means that God gives mankind certain rights when each one is born. They belong to human beings simply because they are human. Among these rights are "life, liberty and the pursuit of happiness." 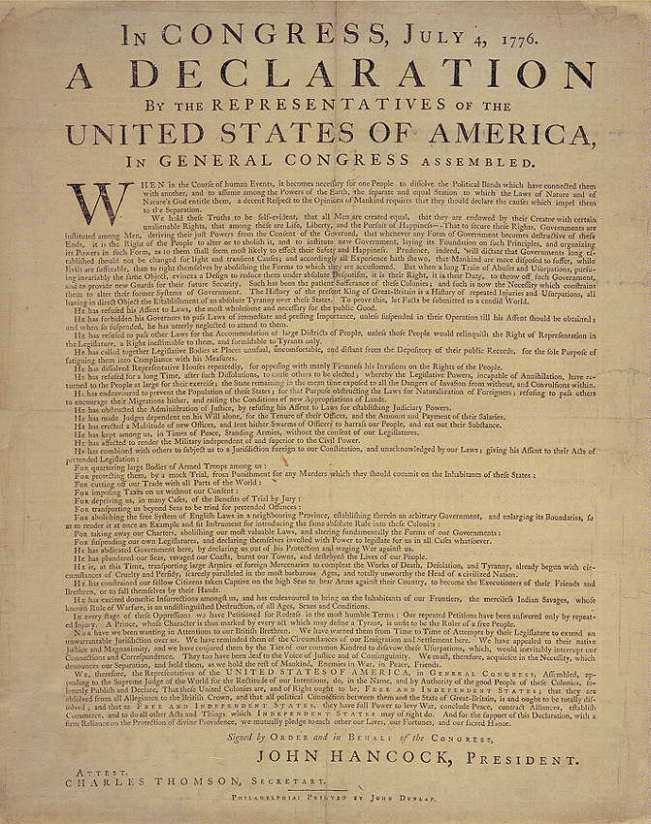 Sometimes though, there are people and events in life that try to take away these rights and privileges. People create governments in order to "secure" or protect these rights. The government derives its power from the "consent of the governed." This means that the people who are being ruled over have a right to choose how their government functions. If the government tries to do things without the people's consent, then that would be unjust. Notice that the signers did not think that a government, such as that of Great Britain, had the right to tell people what to do, or to dictate to people how they should live. Nor did they believe that a government existed for supplying people's needs or solely for the building up of its own self. They believed that governments should be allowed to exist only to protect their God given rights.

Thomas Jefferson wrote the Declaration of Independence. In it, he wrote that if ever "any form of government becomes destructive of these ends, it is the right of the people to alter or to abolish it, and to institute New Government." This means that if a government starts doing things that destroy people's rights, rather than protecting their rights, it is their right to change or destroy that form of government, and to institute a new one that will protect their rights once again. You can learn more about Thomas Jefferson and the Declaration of Independence here.

The Declaration goes on to list a great number of violations of the trust that the people of the thirteen colonies had with the King of Great Britain. The members of the Continental Congress listed all of these grievances in the Declaration to prove to their fellow Americans, to the population of Great Britain, to the King himself and to the entire world, that they were justified in breaking away from this unjust government that was not protecting their God given human rights, but was instead, actively working to destroy the very rights it was supposed to be protecting.

You can read a complete copy of the Declaration text here.

Purpose of the Declaration of Independence -
Grievances against the King

Many people know the Americans were unhappy with various taxes the British government was placing upon them. During a course of 20 years, Britain had angered the Americans with such things as the Molasses Act, the Proclamation of 1763, the Sugar Act, the Currency Act and the Stamp Act. Their anger often turned into violence.

Purpose of the Declaration of Independence -
Hopes of Foreign Intervention

The members of the Continental Congress knew they would need foreign support if they were to defeat Great Britain. They needed guns and ammunition, ships and military training. Their main hopes lay with France and Spain. France and Spain had long been enemies of England and if the Americans could get one or the other of them to be on their side, it would greatly affect the outcome of the war.

If the Americans could present a united front, they could possibly persuade the French or Spanish to join with them against Great Britain. They hoped their Declaration of independence from Britain would show these powers that they were indeed serious and, indeed, that their rebellion would be successful. The Americans would need the financial and military assistance of one of these great powers. It would also be in the interest of these nations to weaken both Great Britain and the American colonies by dividing them because they would become a powerful adversary if they remained together.

If the Americans appeared weak, however, and appeared to be divided, it might dissuade the French and Spanish from joining together with them. One purpose of the Declaration of Independence then, was to present a strong and unified nation that the other European governments were looking for, in order to persuade them to join in the war against Great Britain. Both France and Spain would eventually join the war on the Americans' side.

Watch this short video about the purposes of the Declaration of Independence:

Learn more about the Declaration of Independence with the following articles: