On this day in history, March 27, 1778, Captain Abraham Whipple runs the USS Columbus aground. Whipple was one of the most prominent American seamen of the Revolution. He grew up in the heavily shipping-oriented city of Providence, Rhode Island and became captain of his own ship in his 20s. When the American Revolution drew near, Whipple led the expedition of citizens from Providence that destroyed the HMS Gaspee, whose captain had been harassing colonial shipping in Narragansett Bay.

In June, 1775, Rhode Island created the first American navy and Whipple was given command of the lead ship, the Katy. Within days, Whipple had fired the first shot of the war at a British vessel and taken the war's first British prize when he captured the armed sloop Diana. Soon, Congress built its own navy and Whipple was appointed captain of the 24 gun frigate Columbus. His first mission was to sail with Commodore Esek Hopkins (his cousin) to the Bahamas, where they captured a large trove of military supplies and the Royal Governor of the colony. 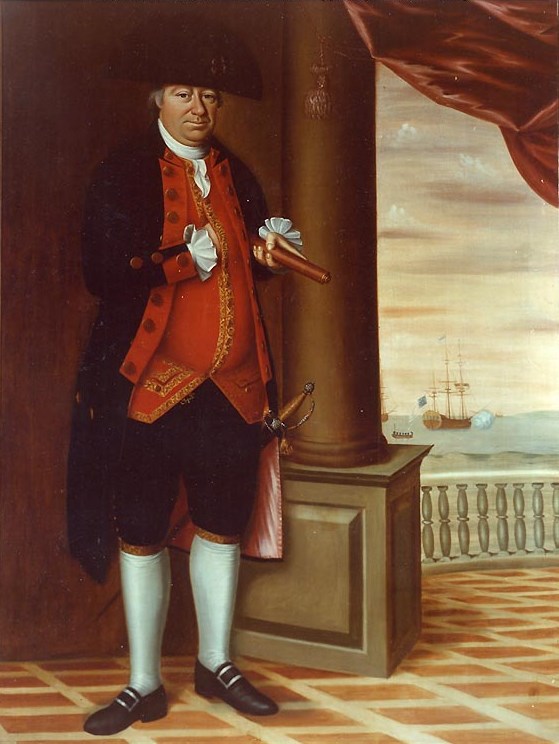 Whipple then sailed the New England seas, capturing British ships. Eventually, he was given orders to oversee the outfitting of two new ships in Newport and to clean up the Columbus. On March 27, 1778, the Columbus was chased by a British squadron and forced Whipple to run her aground. Whipple and the sailors escaped, but the British burned the ship. Whipple then received orders to break the blockade of Narragansett Bay to take news of the American victory at Saratoga to France. Whipple successfully broke the blockade by stealth at night and damaged several British ships along the way. 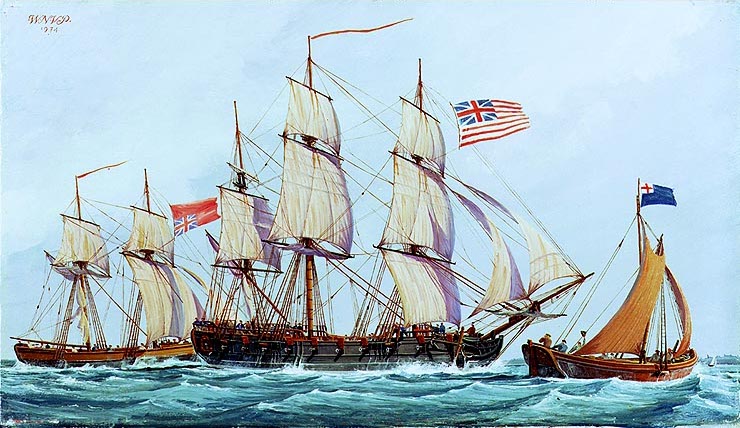 Click to enlarge
The Ship Columbus of the Continental Navy
by Noland Van Powell
Depicts the USS Columbus, under the command of
Abraham Whipple, bringing in the British brig
Lord Lifford, after capturing her in 1776.

After his successful return, Whipple was given command of a 3 ship squadron. In April of 1779, they came across a British fleet of 60 ships in the fog off Newfoundland, laden with supplies from Jamaica. Whipple's small fleet didn't have time to escape, so Whipple ordered them to raise British flags and sail along with the fleet. By this trick, his small fleet began capturing ships one by one through various subterfuges, until 11 ships were captured! When they returned to Boston with their prizes, valued at over a million dollars, Abraham Whipple became a celebrity to the point that songs were written about him.

Congress next sent Whipple to reinforce Major General Benjamin Lincoln at Charleston, South Carolina. When Whipple arrived there, his fleet was quickly blockaded by British ships in the harbor and could not get out. When the city was captured in May, 1780, Whipple was among the thousands of Americans taken prisoner. He spent the next 2 1/2 years as a prisoner and was finally released in late 1782. After the war, Whipple sailed to London on a merchant voyage and became the first person to raise the American flag there, and on a ship with George Washington's head on the bow no less.

Whipple made an attempt at farming in Cranston, Rhode Island, but eventually moved to Ohio with his son-in-law. They became some of the original founders of Marietta, Ohio, and lived there for the rest of their lives. In 1801, Whipple made history yet again when he sailed the first merchant ship built on the Ohio River down the Mississippi to New Orleans and on to Cuba, laden with goods for sale from the Ohio River alley. This was the beginning of a lucrative trade from the Ohio valley to the rest of the world. Whipple finally passed away at the age of 85 in Marietta in 1819.