The Americans win the Battle of Saint-Pierre

On this day in history, March 25, 1776, the Americans win the Battle of Saint-Pierre as they fight with Loyalist Canadians near Quebec City. The Continental Congress tried to persuade the people of Quebec to join in the Revolution against England. In the fall of 1775, they sent an invasion force to drive the British out of Quebec. This was important not only to free the citizens of Quebec, but also to prevent the British from using the area as a staging ground for an invasion south into New York.

Montreal fell to the Americans under General Richard Montgomery in November and then moved on to Quebec City where the Royal Governor, General Sir Guy Carleton, was waiting. Montgomery met Colonel Benedict Arnold there and they surrounded the city. They staged an all-out attack on the city on the night of December 31 in a snowstorm and were terribly defeated. Montgomery was killed and Arnold injured. 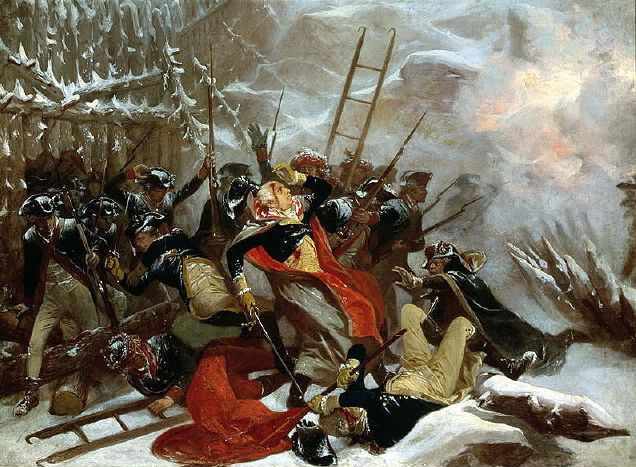 After the battle, Arnold continued the siege on the city, which lasted until spring. On March 14, a Loyalist citizen named Jean-Baptiste Chasson crossed the St. Lawrence River to Quebec City and informed Governor Carleton that the Americans were building a cannon battery across the river at Pointe-Levis. This position would give the Americans the high ground over the river and control of the city's harbor.

Carleton was waiting for reinforcements to come by way of the river so he immediately sent Chasson with a message to Louis Lienard de Beaujeu, the manager of Crane Island, which was north of the city in the river. Beaujeu had military experience from the French and Indian War and was instructed to raise a force to destroy the unfinished battery at Pointe-Levis. Beaujeu set about his task immediately and by March 24, had raised almost 200 men for the job. 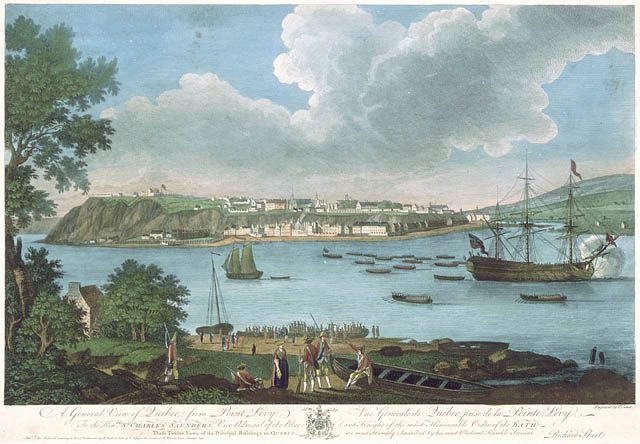 Click to enlarge
View of Quebec from Point Levis, 1760
This picture shows the view of Quebec City from Point Levis
from around 1761. You can see how commanding Point
Levis with a military battery would have given the Americans
control over the river and the harbor.
Source

On March 24, Beaujeu sent 46 men forward to establish a base at Saint-Pierre, which they did in the home of a Loyalist. Local citizens who were favorable to the Americans became aware of Beaujeu's recruiting activities and warned the soldiers at Pointe-Levis, who in turn told Colonel Arnold. Over 200 men were quickly sent to deal with the gathering Loyalist militia.

On the 25th, the Americans and Canadian sympathizers attacked the advance guard at Saint-Pierre. The Canadians were holed up inside the house which was their headquarters and came under musket and cannon fire. Eventually, most of them surrendered, while a few escaped and a few were killed. The battle is unique because neighbors and even some family members fought against each other on both sides since both groups were raised from the same towns.

Chasson was arrested and Beaujeu went into hiding after the rout. The Americans released many of the captives on the promise they would not take up arms again. The Americans continued the Siege on Quebec until May when Arnold's replacement, General John Thomas, decided the effort was futile and began a retreat back to New York.

Return to top of Americans win the Battle of Saint-Pierre