On this day in history, March 8, 1782, 96 Christian Indians are killed in the Gnadenhutten Massacre, one of the most brutal and tragic atrocities of the American Revolution. The Lenape Indians had moved to Ohio after being forced from their land on the eastern seaboard. Several hundred had converted to Christianity under Moravian missionaries and lived in small villages, including Gnadenhutten.

The Moravian strategy was to create Christian settlements secluded from non-Christians and from the animistic practices of their former tribes. These converts were generally "Europeanized," wore white people's clothing, intermarried with whites and so on. When the American Revolution arrived, some Lenape sided with the British and others with the Americans. The Moravian villages, including Gnadenhutten, remained neutral in the conflict, but were known to pass intelligence on British movements to the Americans. 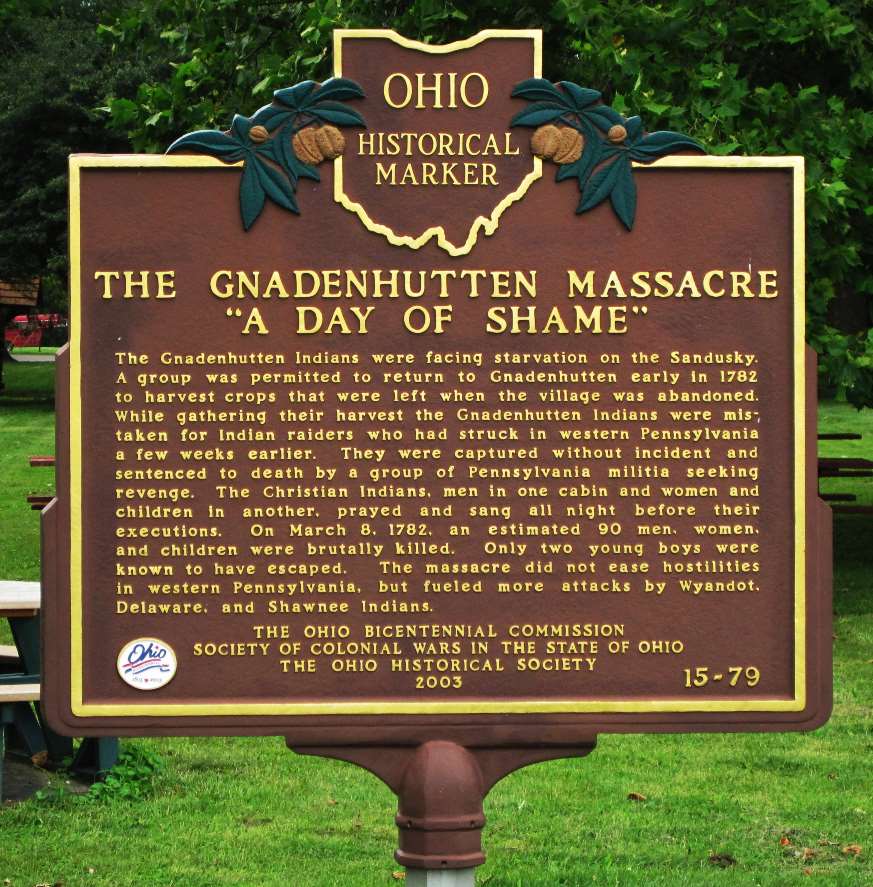 In September of 1781, several British allied tribes forcibly removed the Christian Indians further north. By February, they were starving and about a hundred went back to harvest crops left at Gnadenhutten. Their timing happened to occur just when a militia raid was being made from western Pennsylvania in response to earlier Indian raids that left several people dead. 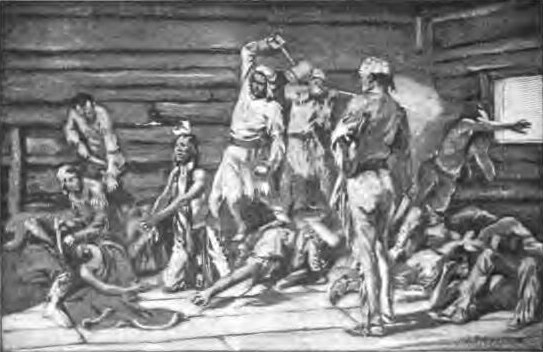 Gnadenhutten Massacre From Stories of Ohio By William Dean Howells, 1897

160 militia showed up as the Indians were gathering their crops. Thinking the whites were their friends, the Lenape welcomed the visitors. The militia posed as friends at first, but then took the Indians captive. The soldiers met and decided all the prisoners should be executed for the raids into Pennsylvania. The Indians protested they had nothing to do with the raids, but the decision was final. Some of the men involved had relatives who were killed in these raids, contributing to their lust for revenge.

On the evening of March 7, the Indians sang hymns and prayed all night, knowing they would be killed the next day. In the morning, they were brought a few at a time into huts and bludgeoned with a club. Then they were scalped, left for dead and the huts burned to the ground. In all, 28 men, 29 women and 39 children were killed. Only a handful of the white men refused to participate, indicating the level of hatred toward the Indians.

Two young boys survived to tell of the massacre, both of whom had been scalped and left for dead. One hid under the floorboards in one of the slaughter huts. He later told of the blood running through the cracks in the floor. The second boy regained consciousness and pretended to be dead. He later snuck away when the executioners left.

The Gnadenhutten Massacre was one of the great tragedies of American history. It sparked revenge attacks against white settlers for decades to come. A monument and museum is located at the site of the event in present day Gnadenhutten, where you can see reconstructed huts and the burial mound where the remains of the Indian martyrs were buried.