On this day in history, March 14, 1776, John Barry is commissioned by the Continental Navy. He would become known as the "Father of the American Navy." Barry was born in Wexford, Ireland. His family was driven from Wexford by the English and he learned a hatred of oppressing invaders when 3,000 Wexfordians were killed by an English army.

Barry began sailing as a boy with his uncle and settled in Philadelphia. He worked for several Philadelphia merchants, captaining their cargo ships to the West Indies. Just before the American Revolution broke out, Barry began working for the firm of Willing, Morris and Cadwalader, who assigned him to their 200 ton ship, the Black Prince. Barry sailed the Black Prince to London and on the return voyage set a record for the longest distance sailed in one day in the entire 18th century, traveling 237 miles in 24 hours. Upon arriving back in Philadelphia, Barry found out the war had begun. Congress apparently first employed Barry in October, 1775 and he assisted in the efforts to outfit and supply Congress' first fleet of ships. 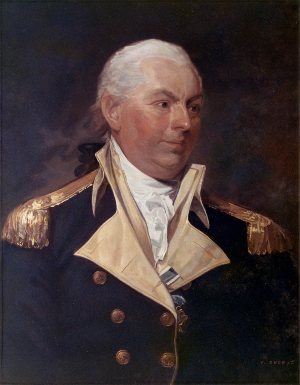 On March 14, 1776, Barry received a captain's commission, signed by John Hancock, and was assigned the 14 gun USS Lexington. Barry sailed from Philadelphia on March 31 and engaged his first British ship on April 7, capturing the first ship by a Continental vessel in the war. On June 28, he helped defend a Pennsylvania ship carrying gunpowder and other supplies when it ran aground after being chased by British ships. Barry organized the removal of the supplies and the defense of the ship.

When there were only 100 barrels of powder left, he had the main sail taken down and wrapped around the gunpowder. When they abandoned the ship, he lit the end of the sail, draped over the side of the ship, on fire. By the time a British boarding party arrived, the flames reached the gunpowder and blew the ship sky high, killing several dozen British soldiers, in a blast that was heard for miles. 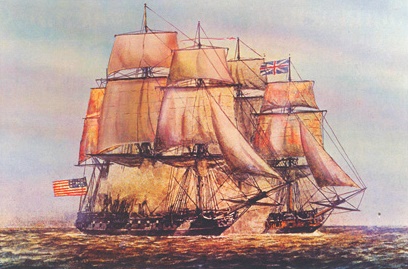 During the Revolution, John Barry captured at least 20 British vessels. He fought as a soldier at the Battles of Princeton and Trenton and during the occupation of Philadelphia. He was severely wounded in a fierce battle off Newfoundland, during which, after losing consciousness, he got up and rallied his crew until they captured the two British vessels that were attacking them. He fought the last naval battle of the war off Cape Canaveral, while delivering a shipload of Spanish coins to the Continental Congress.

After the Revolution, Barry got back into mercantile shipping and made several voyages to the Orient. When George Washington re-established the Navy in the 1790s, Barry was made Commodore of the United States Navy, receiving Commission Number One, dated June 4, 1794. He oversaw the building of the Continental Fleet and captured several French vessels during the Quasi-War. He finally retired on March 6, 1801 after bringing the USS United States back to Philadelphia from the West Indies. Barry trained numerous sailors who went on to be naval leaders of the War of 1812 and is often called the "Father of the American Navy." He passed away in 1803 at his home near Philadelphia.