American victory at the Battle of Princeton

On this day in history, January 3, 1777, the American victory at the Battle of Princeton causes the British to withdraw from most of New Jersey, after this third decisive victory in ten days. George Washington surprised the Hessian garrison at Trenton on December 26 and took 1,000 captives. This was followed up on January 2 with a victory at the Battle of Assunpink Creek, where Washington was able to drive back three assaults from General Charles Cornwallis.

After this failure, Cornwallis decided to call off the attack until morning, even though some of his officers believed Washington would try to escape in the night. Washington took advantage of the decision, but rather than running, he decided to attack the British rear guard left at Princeton. He took his army east and then to the north in utter silence during the night, approaching Princeton at dawn. 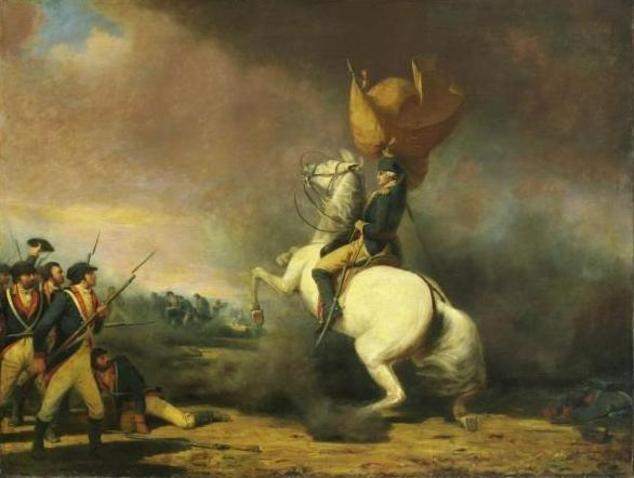 General George Washington rallying his troops at the Battle of Princeton by William Ranney, 1848

In the morning, Washington dispatched Brigadier General Hugh Mercer to destroy a bridge on the post road between Trenton and Princeton to delay Cornwallis' pursuit. When General Mercer arrived at the post road, he ran straight into 800 men under the command of Lt. Col. Charles Mawhood, marching south from Princeton. Mawhood ordered a charge on the rebels, who were mostly equipped with rifles and no bayonets. Unable to defend themselves against a bayonet charge, they were quickly overrun, trapping General Mercer. Thinking they had cornered George Washington, the British soldiers shouted, "Surrender you damn rebel!" When Mercer refused and charged them instead, he was bayoneted and left for dead, causing the rest of his men to scatter. Another 1100 militia appeared just then, but when they saw Mercer's men fleeing, they began to flee as well. 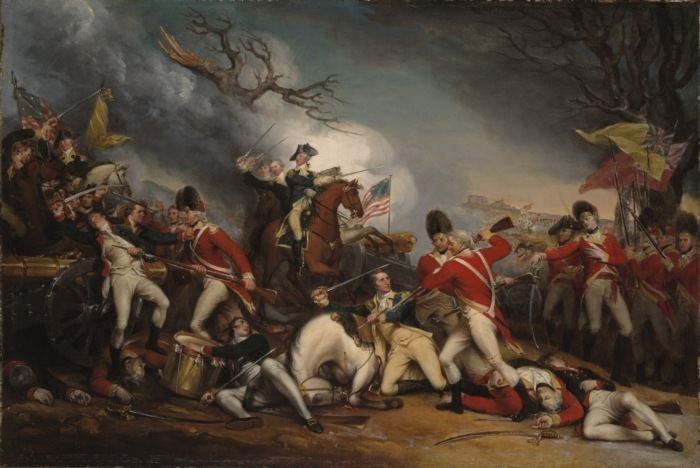 At this point, George Washington arrived with yet more troops. Seeing the fleeing militia, Washington quickly rode his horse straight into the battle, rallying the troops and shouting, "Parade with us my brave fellows! There is but a handful of the enemy and we shall have them directly!" Following their leader, the Americans quickly gained control of the field. Now outnumbered, Mawhood ordered a retreat as his line began to dissolve under heavy fire.

Knowing that Cornwallis was approaching from the south, Washington retreated back to Princeton where his men quickly captured the remaining troops who had holed up in Nassau Hall at the College of New Jersey (now Princeton), surrendering themselves to a young Captain Alexander Hamilton.

Washington wished to continue attacking British outposts after three victories in ten days, but Generals Knox and Greene warned him that even though the Continental Army was newly inspired by the recent victories, they were worn out and greatly outnumbered. Following their advice, Washington moved north to Morristown and took up winter quarters. General Cornwallis and Commander-in-Chief William Howe abandoned southern New Jersey after these defeats, removing all of their men to New Brunswick which held substantial supplies and money reserves, taking up winter quarters there until the spring.

Return to top of American victory at the Battle of Princeton