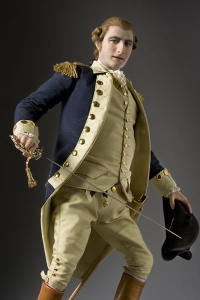 On this day in history, January 5, 1781, Benedict Arnold captures and burns Richmond, Virginia. Arnold began the Revolution with several distinguished victories on the American side, including his services at Fort Ticonderoga, Fort St. Jean, the attack on Quebec, the Battle of Valcour Island and the Battle of Saratoga. He was given command of Rhode Island during the British invasion there and was given command of Philadelphia after the British abandoned the city.

All of this makes it seem as if Arnold was quite the hero, but in reality, he was in constant conflict with his fellow officers, who took him to be an opportunist, seeking whatever type of glory, money and promotion he could at whatever cost. After moving to Philadelphia, he began consorting with Loyalists and married the daughter of a prominent Loyalist. Shortly after their marriage, Arnold began secret talks with the British about switching sides.

He was transferred to West Point, New York on the Hudson River and planned to surrender the post to the British for £20,000, but the plot was exposed when British Major John Andre was captured with papers containing details of the plot. Arnold escaped to New York City and was given a Brigadier General's commission in the British army. He began to raise his own Loyalist troops and was sent to Virginia with 1600 men to aid General Cornwallis in his attempt to take over the Southern States. 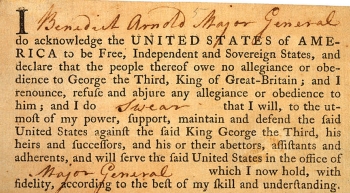 Thomas Jefferson was governor of Virginia at the time and had moved the capital from Williamsburg, on the coast, further inland to Richmond. Arnold's fleet arrived in early January and proceeded up the James River. They were spotted, but they were overlooked by Jefferson, who was not expecting an attack so far inland. When it became apparent that the capital was in danger, Jefferson scrambled to get military supplies out of the city and called out the militia, while the government retreated to Charlottesville.

On January 5th, Arnold entered Richmond without a fight. The few hundred militia that had assembled fled before him. Arnold sent word to Jefferson that he would not destroy the city if he was allowed to take away local tobacco stores unaccosted, but Jefferson refused. Arnold then proceeded to destroy public buildings and private homes, causing great damage. Following the destruction of the city, Arnold's men proceeded to Portsmouth where they set up a base and continued raids in the countryside.

General Cornwallis arrived in May and took over the operations and Arnold returned to New York where he was given command of an expedition which captured Fort Griswold and burned New London, Connecticut. When Cornwallis surrendered his army to George Washington in October, Arnold fled to London where he tried incessantly to get another military appointment, but was always rebuffed. He died a pauper in London in 1801 and was buried without a military service.