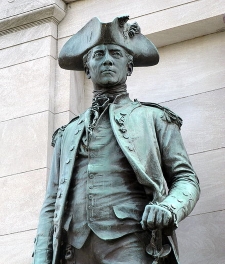 On this day in history, January 10, 1779, John Paul Jones takes command of the Bonhomme Richard. John Paul Jones was born in Scotland and became a sailor at the age of thirteen. He eventually moved to Virginia and volunteered his services to the Continental Congress in the fall of 1775.

After a series of successful missions in American waters, Jones sailed for France on the USS Ranger to meet with America's diplomats there, Ben Franklin, John Adams and Arthur Lee. Jones shared with them his plan to harass British ships in British waters and they gave him permission to proceed. The Ranger made some attacks on the British coast and captured a British warship, having an enormous psychological impact on the British people, making the people realize they were not safe even in their homeland.

After returning to France, Jones was given command of the Duc de Duras, a French merchant ship given to the Americans by King Louis XVI. Jones renamed it the Bonhomme Richard in honor of Ben Franklin's Poor Richard's Almanack character, Richard Saunders (the French version was called Les Maximes du Bonhomme Richard). Jones had the ship outfitted for war and left at the head of a 5 ship convoy in August for another raid along the east side of Britain, spreading fear up and down the British coast. 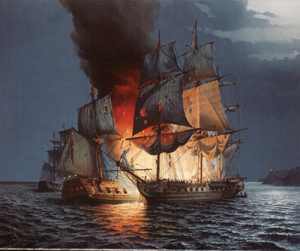 The Battle of Flamborough Head, 1779 by Roy Reynolds

On September 23, the fleet met a convoy of 41 merchant ships off Flamborough Head, escorted by the 50 gun HMS Serapis. An engagement began in which the Bonhomme Richard was severely damaged. Jones knew he could not compete against the greater firepower of the Serapis and succeeded in maneuvering close enough to tie the two vessels together. Both crews tried to board the other ship unsuccessfully and nearly half the crews of each died in the battle. When another ship in Jones' convoy finally came to the Bonhomme Richard's aid, the captain of the Serapis knew he could not win against both ships and finally surrendered.

Jones' crew took over the Serapis and tried in vain to repair the Bonhomme Richard, which by this time had gaping holes through her body so large that you could see all the way through the ship. She was badly leaking water and sunk about 36 hours later. Jones took command of the Serapis and sailed her to the Netherlands where the British attempted to get him charged as a pirate. The attempt failed however when a flag, allegedly designed by Ben Franklin from a description he just received of the newly approved American flag, was raised over the vessel. This flag made the vessel a vessel of war and not a pirate ship and Jones escaped further trouble. The flag became known as the Serapis Flag, but is sometimes called the John Paul Jones flag as well.

After the war Jones served in the Russian Navy for a time, but retired to Paris where he died in 1792. He is considered America's first naval hero for his actions in the war. His body was moved from France to the United States Naval Academy in Annapolis, Maryland in 1906 and the burial service was presided over by President Theodore Roosevelt.