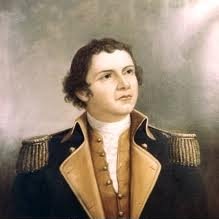 On this day in history, January 12, 1777, General Hugh Mercer dies from wounds received at the Battle of Princeton. General Mercer was born in Scotland in 1726 and trained as a doctor. He served as a surgeon in the army of Bonnie Prince Charlie and was present at the defeat of his army at the Battle of Culloden, an army which was raised to put a Stuart King back on the throne of England.

This army was destroyed by the forces of Hanover King George II at the Battle of Culloden, Scotland on April 16, 1746. George's forces massacred as many survivors as they could find, forcing Mercer into exile as a result. He eventually made his way to the colony of Pennsylvania where he settled and resumed his medical practice.

When the Braddock Expedition was massacred in 1755, Mercer came to the aid of some of the wounded soldiers and was moved by the experience because it reminded him of the massacre of his countrymen at the Battle of Culloden. This caused him to join the British army, which he had once fought against, to fight the Indians during the French and Indian War.

He became a captain of Pennsylvania militia in 1756 and was severely wounded during a raid on an Indian village that year. He was separated from his troops and marched across the wilderness for 100 miles alone to get back to his fort, after which he was promoted to colonel. During the French and Indian War, Mercer became friends with George Washington, who was also a colonel at the same time. They were such good friends that Mercer moved to Virginia after the war and settled in Fredericksburg, resuming his medical practice. 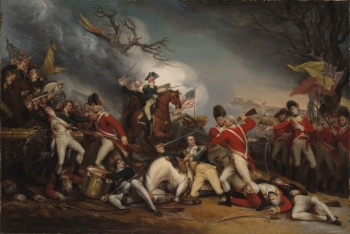 When the American Revolution began, Mercer was appointed a Brigadier General in the Continental Army by the Continental Congress. He directed the building of Fort Lee on the New Jersey side of the Hudson River to impede British access up the river.

After the Continental Army was driven from New York and across New Jersey in the fall of 1776, they stopped their retreat on the Pennsylvania side of the Delaware River. Mercer is sometimes credited with coming up with the plan to attack the Hessian outpost at Trenton, which helped stem the discouraging tide of American losses. Washington's forces ferried across the river in the middle of the night on Christmas Day and captured 1,000 Hessians at the outpost.

This led to another victory a week later when Washington repulsed a counterattack from Lt. General Charles Cornwallis at Trenton again. After that victory, Washington's men marched through the night toward Princeton to capture the British outpost there and continue its string of victories.

Hugh Mercer led an advance party of 1200 men that ran into a large British force at an orchard along the way and fighting began. The British force quickly defeated the green American militia units and General Mercer was surrounded by British troops who mistook him for George Washington and demanded that he surrender. Mercer fiercely attacked his antagonizers, but was struck to the ground, bayoneted seven times and left for dead. He was attended by Declaration of Independence signer Doctor Benjamin Rush, but he died nine days later on January 12, 1777. He was buried at Christ Church in Philadelphia originally, but his body was reinterred at Laurel Hill Cemetery in 1840.