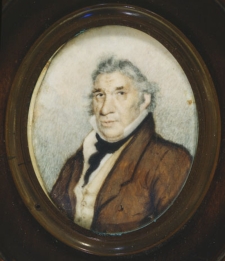 On this day in history, January 16, 1831, Peter Francisco, the "Virginia Giant," dies. Peter was abandoned at the age of five years in City Point, Virginia (now Hopewell) by a sea captain. It is believed he was born in the Azores to a wealthy family and was either abducted to be sold into slavery or the abduction was staged by his parents who feared his life was in danger from their political enemies.

When Peter was found, he could speak no English, but repeatedly said "Pedro Francisco," so the people called him Peter Francisco. Peter was cared for in the Prince George County Poorhouse until he was adopted by Judge Anthony Winston, uncle to Patrick Henry. Winston raised Peter on his farm called "Hunting Tower Plantation" in Buckingham County. He was eventually trained to be a blacksmith due to his great height and strength – by the time he was fifteen years old, Peter had grown to be six feet six inches tall and weighed 260 pounds!

When the American Revolution began, Peter happened to hear Patrick Henry's "Give Me Liberty or Give Me Death" speech when he went to Richmond with Judge Winston. Inspired by the speech, Peter asked if he could join the army, but Winston wouldn't allow him to join until he was sixteen. In December of 1776, Peter joined the Tenth Virginia regiment of the Continental Army.

Peter became famous for his exploits in the army and probably became the best known individual soldier of the entire war. His exploits are numerous, including inspiring a group of soldiers to stand their ground at Sandy Hollow Gap to allow Washington's army to retreat at the Battle of Brandywine. Peter was wounded in the leg at the battle and recovered with the 20 year old Marquis de Lafayette, who was also wounded and would become a lifelong friend. 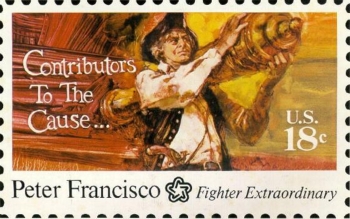 At the Battle of Stony Point, Peter was one of 20 commandos chosen to assault Fort Stony Point. 17 of the 20 were killed. Peter was the second one over the wall and received a 9 inch gash in his stomach. At the Battle of Camden, Peter allegedly hauled an 1100 pound cannon off the field so the British would not capture it. At the Battle of Guilford Courthouse, Peter killed eleven men with a six foot sword made for him personally by George Washington at the request of Lafayette. Peter was shot and left for dead on the battlefield, but found by a local Quaker who nursed him back to health. While recovering from this wound, Peter reconnoitered Colonel Banastre Tarleton's raiders in Amelia, Virginia. He outwitted and outfought 9 cavalrymen, killed three of them and escaped with all 9 of their horses!

Peter also fought in the Battles of Germantown, Monmouth Courthouse, and Cowpens. Peter was present at Yorktown with the Marquis de Lafayette when Cornwallis surrendered his army, but did not fight in the battle. George Washington personally said of Peter, "Without him we would have lost two crucial battles, perhaps the War, and with it our freedom. He was truly a One Man Army."

Peter married three times and had six children. He owned a 250 acre farm on Louse Creek and became the Sergeant-at-Arms to the Virginia State Senate for the last three years of his life. He died on January 16, 1831 of appendicitis and was buried with full military honors.