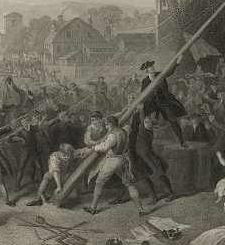 On this day in history, January 19, 1770, the "First Blood" of the American Revolution is shed at the Battle of Golden Hill. The Liberty Pole in New York City was first erected on the Commons in 1766. Soldiers in a barracks on the north side of the Commons saw this sign of defiance every day and tore it down in August, only to have 3,000 angry citizens confront them. Both sides were armed, but no one was hurt. The citizens erected another pole, but it was torn down in September. A third pole was erected, and this one stood until March 18, 1769, when it was torn down after that month's Stamp Act repeal celebrations.

Yet another pole was raised, this one sheathed in iron to protect it. On March 21, soldiers attempted to blow it up with gunpowder but failed. Two more attempts were made, but thwarted. This pole stood on the Commons until December, 1769, when the new Assembly complied with the Quartering Act by giving some money for the upkeep of the soldiers, an act which previous assemblies had refused.

This caused a new round of protests at the Liberty Pole and soldiers tried to blow it up on the night of January 13, 1770. They stopped when citizens from the local Montagne's Tavern sounded the alarm and ransacked the tavern instead. The Sons of Liberty called for a meeting at the pole the next Wednesday, but the soldiers finally succeeded in blowing it up the night before. When it was discovered, a mob of citizens approached the nearby barracks. The soldiers lined up with drawn bayonets, but officers corralled them back inside. 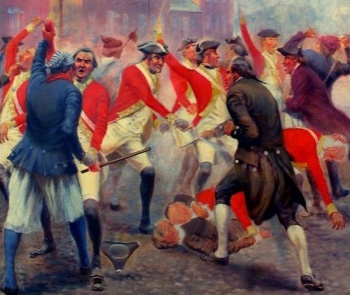 On January 19, several soldiers began posting handbills around town which demeaned the local citizens. Sons of Liberty leader Isaac Sears and others stopped them, but some escaped. Sears took 2 prisoners to the mayor's house and a large crowd gathered. Soon a group of 20 soldiers showed up to rescue their friends. The 2 soldiers in the house were alarmed by the crowd and told their friends to leave, which they did, but the crowd followed them, harassing them with epithets.

When the soldiers reached Golden Hill, a small hill where wheat was grown, another group of soldiers arrived. This emboldened the first group and they turned to face the angry crowd. At this point, one of the soldiers cried out, "Draw your bayonets and cut your way through them!" They attacked the crowd, which began to flee, lunging at anyone who came across their path.

Francis Field, an innocent bystander, was slashed across the face when he stepped into his doorway to see what was the matter. A food vendor and a fisherman were injured and another man took a near fatal bayonet stab. Finally, British officers arrived and were able to get control of their men. None of the victims died, however. The following day, violence flared again and a sailor was stabbed with a bayonet.