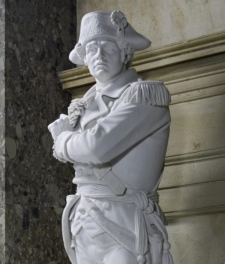 On this day in history, January 21, 1738, Colonel Ethan Allen is born. Allen became a land owner in the late 1760s in the area known as the New Hampshire Grants, the area of present day Vermont. Before the American Revolution, both Connecticut and New York claimed ownership of the land and granted land rights in the area causing frequent disputes between settlers with competing land claims.

Eventually, the local settlers formed the Green Mountain Boys, a militia group charged with stopping the actions of any New York officials or settlers in the area, and named Allen the group's commander. New York's Governor William Tryon eventually ordered Allen's arrest and put a price on his head for the Boys' activities.

When the Revolution began, the Green Mountain Boys immediately planned and captured the British Fort Ticonderoga and Fort Crown Point. Allen led the mission and was celebrated as a hero for the victories. The cannons captured at Ticonderoga were brought by Colonel Henry Knox across the wilderness to assist in breaking the Siege of Boston. On June 22, Allen and his cousin, Seth Warner, appeared before Congress and the Green Mountain Boys were brought into the Continental Army, but Warner was chosen as the leader because Allen's personality and ego had turned many people off. 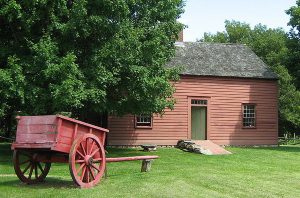 Congress invaded Canada that fall and Allen, who was supposed to be out recruiting local citizens for the army, attempted to capture Montreal. His small force was easily defeated and Allen was captured. He spent the next 2 1/2 years as a prisoner of war. He was eventually released in a prisoner exchange in 1778, received by George Washington and given an honorary title in the Army, but was never used in action for the rest of the war.

When Allen returned to Vermont, he became involved in local politics for the next several years, during which Vermont tried unsuccessfully to become the 14th state. Congress was reluctant because four states laid claim to the land and Congress couldn't settle their dispute. As a result, certain figures in Vermont, including Allen, began negotiations with the British to come back under British rule. Historians believe these figures needed a government to protect their landholdings and since the US wouldn't receive them, they went to the next best alternative. Vermont was finally accepted as the 14th state in 1791.

In 1785, Allen published Reason: the Only Oracle of Man, a polemic against Christianity. He was a believer in God, but was a deist and did not believe in the authority of the Bible or the divinity of Jesus Christ, earning him the reputation of a scoundrel in the eyes of many. He was only able to sell 200 copies, despite the widespread popularity of his earlier work, A Narrative of Colonel Ethan Allen's Captivity, about his time as a prisoner of war.

Allen passed away on February 12, 1789 after having a stroke. His statue is featured in the US Capitol's Statuary Hall as one of two Vermont leaders chosen by that state to be represented there. Allen's grandson Ethan Allen Hitchcock served as a Union General in the Civil War.