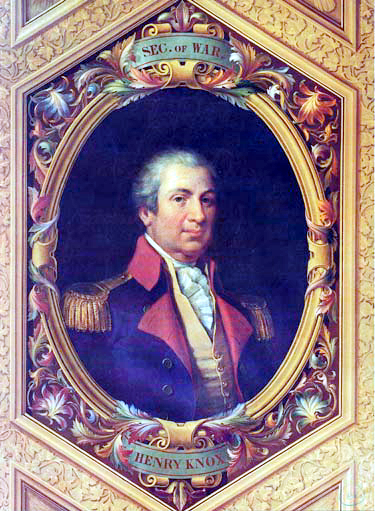 On this day in history, November 17, 1775, Henry Knox begins the "Knox Expedition," leaving Boston for Fort Ticonderoga at the direction of George Washington to bring 60 tons of captured British artillery across the frozen mountains of New England and back to Boston to help drive the British out of the city. The trip became known as the Knox Expedition and makes the history books because of Knox's daring feat, bringing the cannons across a large lake, on snowsleds and across frozen rivers.

Henry Knox was a 25 year old bookseller from Boston with an interest in military history. When George Washington took control of the Continental Army at Boston, he and Knox became friends. Benedict Arnold, Ethan Allen and the Green Mountain Boys of Vermont had captured Fort Ticonderoga in New York in May, along with its huge supply of cannons and other materials.

Washington sent Knox to retrieve the cannons, a journey that was supposed to last two weeks. Knox reached Ticonderoga on December 5. He chose 60 tons of cannons, mortars and howitzers, including several 24 pound cannons known as "Big Berthas," which were 11 feet long and weighed 5,000 pounds.

The cannons were carried to the northern end of Lake George and put on a ship. The ship grounded once on a rock and began to sink at another point because of the weight. It was almost a disaster, but the water was bailed out and the cannons arrived safely at the southern tip of the lake. It was already winter and Knox built 42 sleds to pull the cannons across the wilderness with 80 yoke of oxen. Two frozen rivers had to be crossed and several cannons broke through the ice, but were retrieved each time. 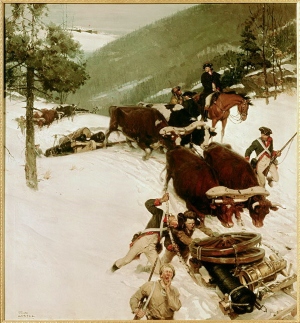 The Noble Train of Artillery by Tom Lovell

Snow and ice, including two feet of snow that fell on Christmas Day, impeded Knox's progress, but he continued to press on. John Adams wrote that he saw the "noble train of artillery," as the equipment came to be called, pass through Framingham, Massachusetts on January 25. The weapons arrived at Cambridge, just outside Boston, on January 27, nearly two months after leaving Ticonderoga. General Washington placed the cannons around Boston, including at the high point of Dorchester Heights, overlooking both the city and the harbor. The advantage forced General William Howe to abandon the city and the British never did return to northern New England.

Coincidentally, Henry Knox received a Colonel's commission from the Continental Congress, and was appointed Chief of the Continental Artillery, also on November 17, 1775, the same day he left to begin the expedition. One year later, after the Battle of Trenton, in which his artillery played an important role, Colonel Knox was promoted to Brigadier General. He became one of George Washington's most trusted advisers. He was promoted to Major General in 1782 and later served as President Washington’s Secretary of War.