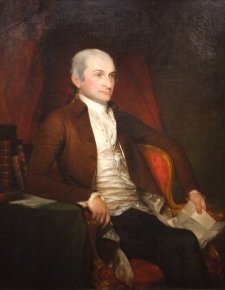 On this day in history, November 19, 1794, Jay's Treaty is signed to bring to an end several years of conflict between Great Britain and the United States after the end of the American Revolution. Once America's independence had been achieved with the Treaty of Paris in 1783, several areas of contention with Britain began to arise. Things got worse and worse, until it looked like war might break out again.

Britain was in a war with France and wanted to keep the Americans on its side. Britain was capturing American merchant vessels sailing into French waters and impressing American sailors into service in the British navy. Americans wanted to be reimbursed for their confiscated ships. Trade between the two countries was vital for America's continued growth and for Britain's ability to sustain itself as a leading global power.

Britain still had several operating forts on the frontier in the Ohio River valley, territory it had ceded to the United States in the Treaty of Paris. Indian tribes in the area who were hostile to the US were receiving help from British Canada. Conflict also continued along the northeast border with Canada because of unclear boundaries between the two nations. In addition, slaveholders in the South wanted reparations from Britain for slaves who had fled with the British when they left America and British Loyalists who had left America at the end of the war wanted remunerations for their confiscated property. 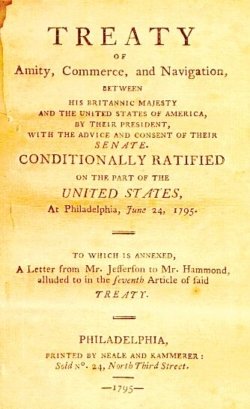 George Washington sent John Jay to London to try to negotiate a peace and resolve these issues to prevent a further war. John Jay was the first Chief Justice of the Supreme Court and, along with John Adams and Ben Franklin, was one of the chief negotiators of the Treaty of Paris. Jay was able to negotiate a treaty with England, but the terms were not all that favorable to the Americans and many in the United States vehemently opposed the treaty's signing. President Washington approved the treaty and it was eventually ratified by the required 2/3s of the Senate.

In Jay's Treaty, the British agreed to abandon the forts in the Ohio River Valley by June 1796. They opened up limited trade to the Americans in the West Indies and in India. They agreed to establishing commissions to deal with boundary issues with Canada, reparations for captured merchant vessels and remuneration for Loyalist losses. Jay's Treaty failed to deal with remunerations for slave losses and with British impressment of American sailors.

Many Americans, including the Republican faction led by Thomas Jefferson and James Madison, opposed Jay's Treaty. They felt it gave the "monarchists" in Britain to much favor. Jefferson's party favored France instead, which was having its own revolution at the time. Opposition to Jay's Treaty was so strong that John Jay was burned in effigy in towns across the country. In the end, George Washington supported the Treaty, even though he didn't agree with everything in it, because he thought it would help avert another war. Indeed it did, and war was averted with Great Britain for another decade, when the War of 1812 began and some of the remaining conflicts between the United States and Great Britain were dealt with once and for all.