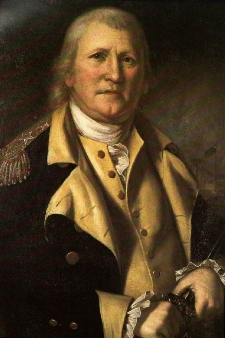 On this day in history, November 23, 1730, Governor and General William Moultrie is born. Moultrie was a celebrated general of the American Revolution, primarily for his role in keeping the British out of the South during the early years of the war at the Battle of Sullivan's Island.

William Moultrie was born in Charleston, South Carolina. He became a colonel in the 2nd South Carolina Regiment in 1775. By September of that year, the South Carolina Council of Safety had grown concerned with British ships patrolling Charleston Harbor. They knew the city of Charleston was vulnerable to invasion from the sea and sent Colonel Moultrie to defend the narrow entrance to the harbor.

Charleston Harbor was guarded by Sullivan's Island on the north and James Island on the south. On September 15th, Col. Moultrie's men attacked the British Fort Johnson on the edge of James Island, but the soldiers had been warned and had abandoned the fort. Moultrie erected his own cannon to guard the harbor and flew a new flag, which he created himself, over the fort, at the direction of the Council of Safety. The flag featured a blue field with a crescent in the corner with the word liberty on it. The flag later became known as the Fort Moultrie Flag. The current flag of South Carolina is a very similar version of the Fort Moultrie Flag. 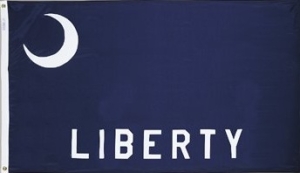 In March, 1776, Col. Moultrie began constructing Fort Sullivan on Sullivan's Island. When a British fleet arrived on June 28, 1776, a battle ensued. Col. Moultrie's men were outnumbered 5 to 1, but the fort held. Only 12 men died in the fort, while the British fleet lost 220 men dead or wounded! It took Sir Peter Parker 3 weeks to repair his ships, after which he abandoned the southern campaign. The British would not make another serious attempt to take Charleston for another three years.

For his heroics, Colonel William Moultrie was promoted to Brigadier General by the Continental Congress and his company was merged into the Continental Army. General Moultrie and others failed to prevent Savannah, Georgia from falling to the British in 1778 and he was captured when the British returned to capture Charleston in 1780, but was returned in a prisoner exchange. In 1782, General Moultrie became the last person appointed a Major General by Congress during the war.

After the American Revolution, William Moultrie became the Governor of South Carolina, serving in this position twice, from 1785-1787 and from 1792-1794. Fort Sullivan was renamed Fort Moultrie in his honor and the fort continued to function as the primary defense of Charleston until Fort Sumter was built. Fort Moultrie served as an active military post for the US Army from 1798 until the end of World War II. William Moultrie died in Charleston in 1805, a few years after writing his memoirs in Memoirs of the American Revolution, two volumes detailing the war in the Carolinas and Georgia.