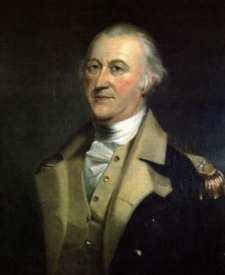 On this day in history, November 26, 1727, General Artemas Ward is born. Artemas Ward was a prominent figure in Massachusetts politics during and after the American Revolution. Ward was born in Shrewsbury, Massachusetts and graduated from Harvard in 1748. He opened a general store in Shrewsbury in 1750, but in 1751, at the age of 24, he began a life of politics. Ward's first government job was as the township assessor for Worcester County. He became a justice of the peace in 1752 and began the first of many years of service as a representative to the Colony's General Assembly. 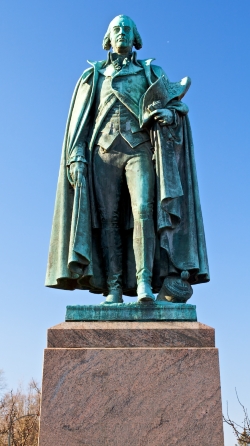 In 1755, during the French and Indian War, Ward became a major in the Worcester County militia. He did not see active military service, however, until two years later when the British attacked the French held Fort Ticonderoga. Ward became a judge on the Court of Common Pleas in 1762, a position he would hold for decades. In the General Assembly, he served alongside such figures as James Otis, John Hancock and Samuel Adams. Ward became so well known for speaking out against British policies in the Assembly that Governor Francis Bernard took away his military commission and voided the election results from Worcester County in 1768 to keep Ward out of the Assembly.

As tensions with England increased, the entire 3rd Regiment of Worcester County resigned from its position under British command and went to Shrewsbury, where they informed Col. Ward that they were now in his service. After Governor Bernard dissolved the Assembly in October, 1774, the cities of Massachusetts set up a new government under the "Committee of Safety," placing Ward as General over the whole colony's militia.

Ward's first job as general was to get the British out of Boston. He organized the defenses on Bunker Hill and at the Siege of Boston. When the newly appointed General George Washington arrived, Ward helped integrate the Massachusetts militia into the Continental Army. Ward was made a Major General, second in command of the Continental Army only to George Washington. General Ward remained in command of the Eastern Department after the British left Boston and held this position until March 20, 1777, when he resigned for health reasons.

Ward continued to serve as a judge during and after the war. As President of the Executive Council, he ran the government of Massachusetts for three years during the war. After this, he served as a delegate to the Continental Congress for a year and in the Massachusetts House of Representatives for six years, including one term as Speaker of the House in 1786. While concurrently serving as Speaker of the House and as a Justice of the Peace, Ward faced down rebels on the steps of the Worcester County Courthouse during Shay's Rebellion, a rebellion over taxes and government policies. Ward served two terms as a Federalist member of the US House of Representatives when the government under the new Constitution was formed.

Artemas Ward finally retired as a judge and from a long life of public service in December, 1797, at the age of 70. He passed away on October 28, 1800 and was buried at Mountain View Cemetery in Shrewsbury. His legacy includes several accomplished authors and the well preserved Artemas Ward House, which is now owned and managed by Harvard University.