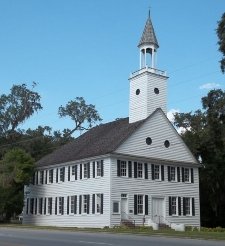 Historic Midway Church As rebuilt in 1792

On this day in history, November 24, 1778, North Carolina wins the Battle of Midway Church. General Augustine Prevost, commander of British forces in British East Florida organized the first British invasion of Georgia in November of 1778, after Sir Henry Clinton determined the British would begin its "Southern Strategy."

The plan was to meet at Sunbury and attack the Americans at Fort Morris, where they also expected to meet another group of British soldiers who were expected to arrive from New York. On November 22, 1778, 100 soldiers under the command of Continental Army Colonel John White and Major James Jackson confronted Prevost's 700 professional soldiers a mile and a half south of Midway in Liberty County, which was called St. John's Parish at the time.

White and Jackson were severely outnumbered, but they hoped to hold out until reinforcements arrived from Savannah. Colonel James Screven soon arrived, but with only 20 soldiers and the Americans were forced to pull back to form a line at Midway Church. Midway Church is an historic church founded by the original Puritan settlers who came to the area from South Carolina. They settled in Midway, named for its distance "midway" between the ports of Savannah and Darien. 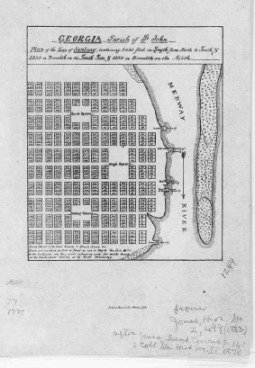 The area surrounding Midway Church was one of the hotbeds of patriot activity in Georgia during the American Revolution. Midway Church has a long and storied list of former members, including Declaration of Independence signers Lyman Hall and Button Gwinnett who both owned land nearby. The church's list of members includes other such notables as the aforementioned Colonel James Screven, General Daniel Stewart, Continental Congressman Benjamin Andrew, US Senators Augustus Bacon , Alfred Iverson and John Elliot, Governors Nathan Brownson, John Martin and Richard Howley, the first US minister to China, John E. Ward and US Representatives William Fleming and John Cuthbert. Other famous descendants from Midway's founding families include Ellen Wilson, wife of President Woodrow Wilson, Supreme Court Justice Oliver Wendell Holmes, President Theodore Roosevelt and inventor Samuel Morse.

Colonel Screven was injured and captured by the British during the Battle of Midway Church. He later died in British custody from his wounds and is thus one of Georgia's first Revolutionary War heros. Prevost began to get nervous and decided to pull back because he knew the closer they got to Savannah, the more likely it would be for large numbers of militia to join the Continentals and overpower them. Midway Church was burned down by the British later during the war, but was rebuilt in 1792.

The following day, November 25th, Lt. Col. Fuser arrived at Sunbury with 500 soldiers, intending to attack Fort Morris, which was defended by 200 Americans. Fuser, like Prevost, realized his soldiers were in severe danger being so deep inside patriot territory. He decided to pull back as well and Britain's first invasion of Georgia came to intend.