On this day in history, November 22, 1783, Maryland patriot leader John Hanson dies. Hanson was the descendant of an indentured servant from England who came to Maryland in 1661. He increased the family's agricultural lands to around 1,000 acres and served for many years in political office in Maryland. Hanson is a little known figure from the American Revolution today, but he played a prominent role during those formative years.

John Hanson began his political career as sheriff of Charles County in 1750, but was soon elected to the Maryland General Assembly in 1757, a position he held for the next 12 years. Hanson became associated with American patriots opposing British policy during the Stamp Act crisis, chairing the committee that wrote Maryland's instructions to the Stamp Act Congress. Hanson also opposed the Townshend Acts, signing a non-importation agreement in 1769 until the Acts were repealed in 1770. 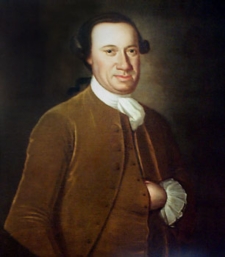 Over the five years leading up to 1774, Hanson moved to Frederick County, a hotbed of patriot activity in Maryland, and served in several local offices. There he was elected to the Maryland Convention, the legislative body formed by Maryland's citizens after the Royal Governor, Sir Robert Eden, closed down the legislature for its acts against England. When Maryland formed its new government in 1777, Hanson was elected a delegate from Frederick County and would serve there for five terms.

In December of 1779, Hanson was elected from Maryland to the Second Continental Congress in Philadelphia. He served there from June, 1780 through 1782. While Hanson served in Congress, Maryland became the final state to approve the Articles of Confederation on March 1, 1781. Hanson's signature appears on the document, along with Daniel Carroll's, as Maryland's serving representatives at the time.

In November of that year, Hanson was elected the first President of the Continental Congress, a fact that has caused some to call him the First President of the United States. In actuality, Samuel Huntington and Thomas McKean each served in the position after the adoption of the Articles in March, but Hanson was the first to serve a full one-year term as the Articles required.

The office of President under the Articles of Confederation was more procedural, writing letters and so forth, and not an executive position as the office is today. Nonetheless, Hanson's election to the office gives him distinction as the First President of a nationally elected body to serve a full term in the United States. Hanson retired from public service when his one-year term as President was over and returned to Maryland where he passed the following year on November 22, 1783. John Hanson is featured as one of Maryland's two statues in Statuary Hall in the United States Capitol, where each state has two statues representing its most prominent patriots.