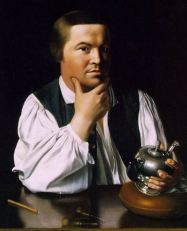 On this day in history, November 21, 1775, the Continental Congress writes to Oswald Eve, asking him to help with the building of a new gunpowder mill in Massachusetts. Oswald Eve was the owner of the only gunpowder mill in the colonies at the time. The letter seeks help from Eve for details about how to manufacture gunpowder and how to set up another mill.

The bearer of the letter to Mr. Eve was none other than Paul Revere. Many people know about Paul Revere's role warning the Massachusetts countryside about the march of the British to Lexington and Concord on April 18, 1775, but they are not aware that Revere was sent on missions to New York and Philadelphia numerous times bearing messages from the patriots in Massachusetts.

Paul Revere was already an accomplished gold and silversmith at the beginning of the American Revolution. The Massachusetts Provincial Congress sent Revere to Philadelphia to seek the Continental Congress' help in building a new powder mill in Massachusetts to help in their efforts against Great Britain. Importing gunpowder was expensive and foreign sources were unreliable because shipments could be confiscated by the enemy. In addition, saltpetre, one of the chief ingredients of gunpowder, could be produced substantially in Massachusetts.

After arriving in Philadelphia, Revere spoke with several members of the Continental Congress. A letter was written by Robert Morris and John Dickinson, both members of Congress, to Oswald Eve and carried to him by Mr. Revere. Mr. Eve received Mr. Revere, but with some reluctance. He was, naturally, concerned that another powder mill in the colonies would compete with his own mill. Morris and Dickinson assured him in the letter that Massachusetts was far enough away from Philadelphia that it wouldn't create additional competition for his mill, but Mr. Eve was unsure.

He ended up giving Revere a tour of his mill, but he would not give him the actual manufacturing method. Paul Revere, being an accomplished metallurgist and chemist, was able to gain enough knowledge about the process, however, just from his walk-through of the mill, that he was able to reproduce the process back at home in a new mill in Canton, Massachusetts. The mill produced tons of powder for the Continental Army during the war.

After the war, Revere became a leading manufacturer of iron, brass and copper products. In fact, he opened the first copper mill in the United States in the same facility where he started the gunpowder mill after buying the property back from the state. This copper works still exists today under the name Revere Copper Company.