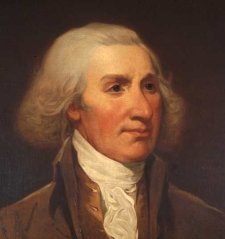 On this day in history, November 18, 1804, General Philip Schuyler dies. Philip Schuyler was a wealthy planter from Albany, New York who owned tens of thousands of acres of land and his own lumber, flour and flax mills, including the first flax mill in America for making linen.

Schuyler served in the French and Indian War as a young man after raising his own militia company and was given the commission of Captain. He became a quartermaster during the war, meaning he was in charge of procuring and managing equipment and supplies. 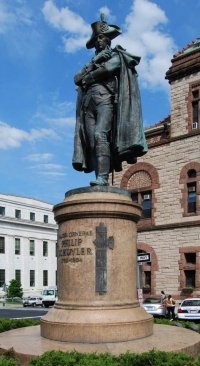 When the American Revolution broke out, Philip Schuyler was elected as a delegate to the Continental Congress from New York, a position he served in only for a few months when he was appointed a Major General in the Continental Army and was placed in charge of the Northern Department. General Schuyler planned the invasion of Canada, but had to place General Richard Montgomery in charge of the operations due to ill health. Montgomery was killed at the Battle of Quebec.

The American invasion of Canada failed and the British launched an attack against New York from Canada in 1777. General Schuyler played a major role in planning the patriots’ defense. In July of that year, Fort Ticonderoga fell to a small detachment of British soldiers and General Schuyler was replaced by General Horatio Gates for dereliction of duty. The British were eventually defeated in New York at the Battle of Saratoga under General Gates and Benedict Arnold, but Schuyler’s country home at Saratoga was destroyed in the process. It was later rebuilt and is part of the Saratoga National Historical Park today.

Did you know that Generay Schuyler's daughter married Alexander Hamilton?

Schuyler demanded a court martial to investigate the charges of dereliction of duty against him and the court martial exonerated him, but he resigned from the army on April 19, 1779. After this Schuyler served two more terms in the Continental Congress.

Over the next decade, General Schuyler served in the New York State Senate from 1780 to 1784 and from 1786 to 1790. In 1789, he became a senator to the First United States Congress from New York. He lost re-election and returned to the State Senate from 1792 to 1797. He was elected a US Senator again in 1797, but resigned in 1798 due to ill health. General Schuyler and his wife, Catherine, had fifteen children. One of whom, Elizabeth, married Alexander Hamilton, future Secretary of the Treasury under George Washington.