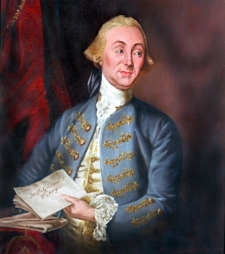 On this day in history, January 18, 1776, James Wright, Royal Governor of Georgia is arrested by the Georgia Provincial Congress. Wright was born in England and moved to South Carolina with his father in 1730. James became a lawyer and began to accumulate large plantations. He went to London in 1757 as South Carolina's agent to Parliament and in 1760 was named Governor of Georgia.

Wright was a popular governor and oversaw much of Georgia's early growth and expansion. He presided over negotiations with the local Creek Indians that saw hundreds of thousands of acres come under Crown rule.

In 1765, Wright was the only colonial governor of the original 13 colonies to successfully use the stamps required in the Stamp Act, albeit only a few were sold there. Governor Wright was confronted at his own front door by an armed group of the local Sons of Liberty who demanded that he not enforce the Stamp Act. The armed Governor met them at the door, but refused to back down.

Much of Georgia's population remained loyal to the King, but patriotic fervor finally took over. In early January, 1776, a small British fleet arrived with the intention of buying rice for the beleaguered troops trapped in the Siege of Boston. The Georgia patriots had no intention of cooperating and the Provincial Congress promptly ordered the arrest of Wright and several other officials to prevent them from helping the newly arrived ships. 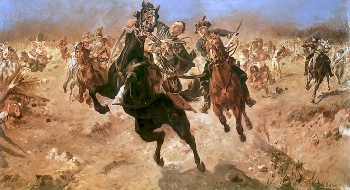 Brigadier General Kazimierz Pulaski mortally wounded at the battle of Savannah on the 9th of October, 1779 by Stanislaw Batowski Kaczor

Wright was arrested on January 18 by Major Joseph Habersham, a soldier who would later become President George Washington's third Postmaster General of the United States. Wright was held captive in the Governor's mansion for several weeks, but escaped on February 11 and made his way to the lead ship of the fleet, the HMS Scarborough, with the help of a Loyalist supporter. On March 2 and 3, a small battle took place when the fleet attempted to capture several rice boats. Some rice was captured, but the fleet finally left, taking Governor Wright with it. It was the end of British colonial rule in Georgia, for a time...

In late December, 1778, the British returned and captured Savannah again. It was the first effort of their new Southern Campaign to retake the southern states. Wright had returned to London after leaving Georgia and spent a year lobbying Parliament to retake the colony. When the effort succeeded, Wright was sent back and resumed the governorship in July, 1778. This was the only instance of the British retaking an American colony after it been taken over by rebels.

Wright was able to reestablish royal control over parts of Georgia, but it was an uphill battle. After the surrender of Cornwallis' army in Virginia in October, 1781, American General "Mad" Anthony Wayne started south and won several battles against British and Indian forces in Georgia. Wright knew it was only a matter of time before Wayne reached Savannah and he knew he could not withstand him when he arrived. Finally, on June 14, 1782, Wright received orders to abandon the city, which he did promptly within the week, abandoning Georgia to the patriots forever.