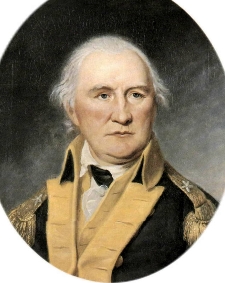 On this day in history, January 17, 1781, General Daniel Morgan wins the Battle of Cowpens, a victory military strategists often call the single most brilliant victory of the American Revolution. After its defeat at Saratoga, the British army redirected its efforts to subdue the southern states, quickly conquering much of Georgia and South Carolina and destroying most of the American southern army in the process.

In December of 1780, General Nathanael Greene took over the decimated Continental Army in the south and split his much smaller army in two, hoping to divide the British forces. Part of the army was given to Brigadier General Daniel Morgan, a hero of earlier battles at Quebec and Saratoga. Morgan was to harass British troops in the backcountry and organize patriot militia there. When General Charles Cornwallis learned of this, he immediately sent 1,100 troops under Lt. Col. Banastre Tarleton to stop him.

Tarleton was only 26 years old and had earned a notorious reputation when his men killed a group of militia trying to surrender to them at the Battle of the Waxhaws. In early January, Tarleton learned of Morgan's location and set off to find him. Morgan retreated at first, but decided to stand his ground at an area known as the Cowpens, a sparsely wooded and hilly meadow in a bend of the Broad River. 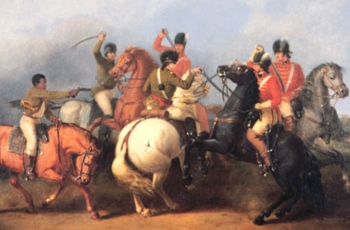 Battle of Cowpens by William Ranney, 1845 The black man at the left is Colonel Washington's bugler. He saves Washington from the other attackers as he himself attacks Banastre Tarleton.

Morgan's strategy included three lines of soldiers, a first line of sharpshooters hidden behind trees, a second line of militia 150 yards back from them and a third line of experienced Continental soldiers 150 yards behind them and hidden by a low hill. As Tarleton attacked, the sharpshooters were to fire on them and then draw back to the second line, which was to fire two volleys and then retreat up the hill. Then, as the British pursued them up the hill, they would run into the third line of experienced soldiers coming at them downhill. The first two lines would weaken and disconcert the British soldiers and the third line would finish them off. Meanwhile, a cavalry charge would come from around the hill and flank the attacking soldiers.

Morgan's strategy worked brilliantly and just as planned. Tarleton's forces were decimated as they pursued the "fleeing" second line. Nearly the entire army was killed or simply collapsed on the ground in exhaustion and fear. Military strategists have called the victory at Cowpens the greatest tactical victory of the war and one of the greatest of all time. Of Tarleton's 1150 troops, 110 were killed, 229 wounded and over 800 captured. Tarleton himself escaped, but not before a hand-to-hand fight with Colonel William Washington, George Washington's second cousin and leader of the American cavalry. Tarleton shot Washington's horse from under his feet and escaped.

The Battle of Cowpens was one of a string of victories, including the Battle of King's Mountain and the Battle of Guilford Courthouse that turned things around in the south. This series of battles so weakened Cornwallis' army that he was forced to abandon his plans to conquer North Carolina and head for the Virginia coast to await reinforcements from New York that never arrived due to the French blockade of the Chesapeake. Instead, George Washington took advantage of Cornwallis' weakened state and brought the war to an end.