General John Burgoyne's play The Blockade of Boston is interrupted 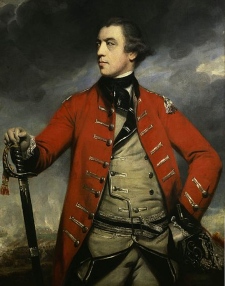 On this day in history, January 8, 1776, General John Burgoyne's play The Blockade of Boston is interrupted when colonists attack Charlestown. Unbeknownst to most, General John Burgoyne, the famous British General who surrendered his army at Saratoga, changing the course of the American Revolution, was also a mildly successful playwright.

Burgoyne published his first play, The Maid of the Oaks, in 1774. It was well received and soon opened at the Drury Lane Theater for a run of several nights to both good and bad reviews, but Burgoyne had established his name as a playwright. When Burgoyne was sent to Boston in May, 1775, he used his influence to have Faneuil Hall converted into a theater. One way bored British soldiers trapped in Boston spent their time was in producing plays twice a week on the upper level of Faneuil Hall, to the complete consternation of Boston's Puritan population, which had outlawed theater performances since 1750, believing them to be instigators of "immorality, impiety and contempt of religion.

While in Boston, Burgoyne wrote The Blockade of Boston, a satirical play making fun of the colonists. No complete copy of the play has survived, but one diary account says George Washington was portrayed as an "uncouth countryman; dressed shabbily, with a large wig and long rusty sword." One line from an American character in the play reveals how the Americans were portrayed: "Ye tarbarrell'd Lawgivers, yankified Prigs, Who are Tyrants in Custom, yet call yourselves Whigs; In return for the Favours you've lavish'd on me, May I see you all hang'd upon Liberty Tree." 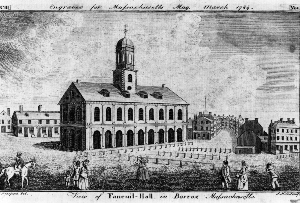 The Blockade of Boston was set to be performed at 9pm on January 8, 1776. Burgoyne was not even in town anymore, having left for London in December. Just as the play was about to begin, a group of 100 colonists under the command of Major Thomas Knowlton staged a raid on the British outpost in Charlestown, across the water from Boston. Several homes were burned and five soldiers were captured in the raid.

As shots rang out from the Fort on Bunker Hill, the soldiers back in Boston heard the commotion. One soldier, dressed in a costume and about to perform, rushed onto the stage and yelled out that the rebels were attacking. The audience of mostly soldiers believed the outburst was part of the performance and stayed in their seats. After some more pleading by the officer/actor, the crowd realized they were truly under attack and began to scramble to their posts.

Eyewitness accounts have the soldiers tripping over each other, jumping over the orchestra pit, stomping on violins, rushing to change from their costumes and wipe the makeup off their faces in order to get to their posts. The Americans had quite a laugh at the scene when it was reported in newspapers a few days later.

John Burgoyne would go on to publish 3 more successful plays in London, but would never become a well-known playwright. He is most remembered for his surrender at the Battle of Saratoga in October, 1777, the event that encouraged France to join the war on the side of the Americans.