The Great Seal of the United States is adopted

On this day in history, June 20, 1782, the Great Seal of the United States is adopted by the Continental Congress. Congress first appointed a committee to create the Great Seal on July 4, 1776, shortly after approving the Declaration of Independence. The committee consisted of Ben Franklin, Thomas Jefferson and John Adams.

The three men volunteered several designs based on biblical and classical themes. After consulting with artist Pierre Eugene du Simitiere, a design was chosen  with a female Liberty figure and a female Justice figure holding a crest and surrounded by small shields representing each of the 13 states for the obverse side (the front), while the reverse side held Moses parting the Red Sea. Congress was not impressed when it received the design on August 20 and tabled it. Several of the themes would eventually make it into the final design, however, including the Eye of Providence, the motto E Pluribus Unum and 1776 written in Roman numerals. 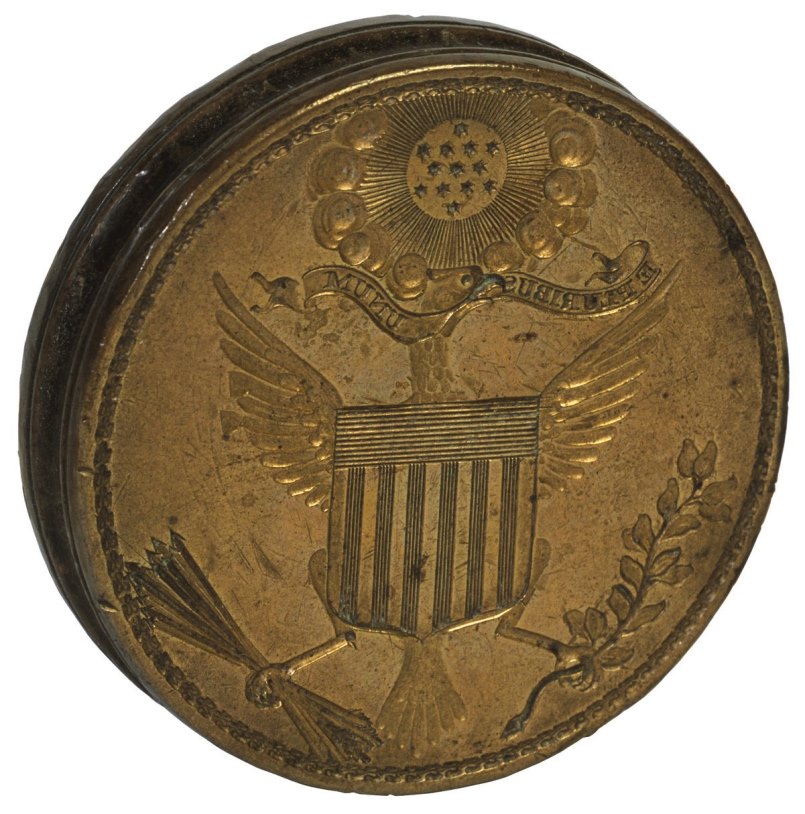 Original die of the Great Seal of the United States

Not until March, 1780 did Congress address the Great Seal again by appointing another committee, this time consisting of James Lovell of Massachusetts and John Morin Scott and William Houston of Virginia. The second committee produced a new design, incorporating some elements from the first committee's design, with the help of heraldry expert, artist and signer of the Declaration of Independence Francis Hopkinson. This committee's design was also rejected by Congress, but again, elements of their design made it into the final Great Seal, including 13 stripes on a shield, 13 stars surrounded by a cloud of glory and the olive branch and arrows.

Two years later, in May of 1782, a third committee was appointed, this time consisting of John Rutledge and Arthur Middleton of South Carolina and Elias Boudinot of New Jersey. Rutledge was later replaced by Arthur Lee of Virginia. This committee relied on a young lawyer and heraldry expert named William Barton. Barton took elements of the first two committees and came up with a design that adhered more closely to traditional rules of heraldry. Elements of this design that made it into the final seal included the eagle and the unfinished pyramid.

Congress did not choose the third committee's design, but instead, turned the creations of all three committees over to its long time secretary Charles Thomson on June 13. Thomson took elements from all three previous designs and made a few changes of his own, including removing the Liberty and Justice figures and using only the eagle and putting a banner in the eagle's mouth. Barton again reviewed the design and made a few minor changes. The final design was presented to and approved by Congress on June 20, 1782.

The original die was cast within the next few months and first used on September 16, 1782. Charles Thomson, as secretary of Congress, kept the die and used it on official documents. It was adopted by the new United States government officially on September 15, 1789. The description of the seal has remained the same since it was adopted in 1782, but the die has changed slightly over the years each time the old one wore out and a new one was created. Such seals or flags often change in design because the "blazon," or the official description describes certain aspects of the design, but leaves others up to artistic interpretation. The current design was adopted in 1903 and all future die casts are to use the exact same design.

Return to top of Great Seal of the United States adopted