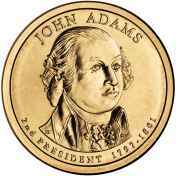 Our John Adams Quotes come from his own writings and letters and give a glimpse into the mind of this great leader of the American Revolution who eventually became President of the United States. Our John Adams Quotes are listed chronologically and the ones on these pages are from 1776-1777. Most of these come from letters to his wife Abigail or from his work called Thoughts on Government.

Thoughts on Government was written at the request of the North Carolina provincial assembly who asked him about his opinions about the best way to form their new government. His response included the suggestions of having 3 branches of government and a dual chamber house and was written in the spring of 1776, before Thomas Jefferson wrote the Declaration of Independence. These John Adams Quotes are listed in chronological order and links to more before and after this time frame can be found at the bottom of the page.

"Yesterday the greatest question was decided which ever was debated in America; and a greater perhaps never was, nor will be, decided among men. A resolution was passed without one dissenting colony, "that these United Colonies are, and of right ought to be, free and independent States." - Comment about the vote to declare independence form Britain, in a letter to Abigail Adams, July 3, 1776

"I am well aware of the Toil and Blood and Treasure, that it will cost Us to maintain this Declaration, and support and defend these States. Yet through all the Gloom I can see the Rays of ravishing Light and Glory. I can see that the End is more than worth all the Means. And that Posterity will triumph in that Days Transaction, even although We should rue it, which I trust in God We shall not." - Letter to Abigail Adams, July 3, 1776

"I am surprised at the suddenness as well as the greatness of this revolution... It is the will of Heaven that the two countries should be sundered forever. It may be the will of Heaven that America shall suffer calamities still more wasting, and distresses yet more dreadful. If this is to be the case it will have this good effect at least. It will inspire us with many virtues which we have not, and correct many errors, follies, and vices which threaten to disturb, dishonor, and destroy us. The furnace of affliction produces refinement in states as well as individuals. And the new Governments we are assuming in every part will require a purification from our vices, and an augmentation of our virtues, or they will be no blessings. The people will have unbounded power, and the people are extremely addicted to corruption and venality, as well as the great. But I must submit all my hopes and fears to an overruling Providence, in which, unfashionable as the faith may be, I firmly believe." - Letter to Abigail Adams, July 3, 1776

"I long for rural and domestic scenes, for the warbling of Birds and the Prattle of my Children. Don't you think I am somewhat poetical this morning, for one of my Years, and considering the Gravity, and Insipidity of my Employment? - As much as I converse with Sages and Heroes, they have very little of my Love or Admiration. I should prefer the Delights of a Garden to the Dominion of a World." - Letter to Abigail Adams, July 3, 1776

"A constitution founded on these principles introduces knowledge among the people, and inspires them with a conscious dignity becoming freemen; a general emulation takes place, which causes good humor, sociability, good manners, and good morals to be general. That elevation of sentiment inspired by such a government, makes the common people brave and enterprising. That ambition which is inspired by it makes them sober, industrious, and frugal." - Thoughts on Government, 1776

"If there is a form of government, then, whose principle and foundation is virtue, will not every sober man acknowledge it better calculated to promote the general happiness than any other form?" - Thoughts on Government, 1776

"Laws for the liberal education of the youth, especially of the lower class of the people, are so extremely wise and useful, that, to a humane and generous mind, no expense for this purpose would be thought extravagant." - Thoughts on Government, 1776

"Upon this point all speculative politicians will agree, that the happiness of society is the end of government, as all divines and moral philosophers will agree that the happiness of the individual is the end of man. From this principle it will follow that the form of government which communicates ease, comfort, security, or, in one word, happiness, to the greatest numbers of persons, and in the greatest degree, is the best." - Thoughts on Government, 1776

"Judges, therefore, should be always men of learning and experience in the laws, of exemplary morals, great patience, calmness, coolness, and attention. Their minds should not be distracted with jarring interests; they should not be dependent upon any man, or body of men." - Thoughts on Government, 1776

"That, as a republic is the best of governments, so that particular arrangements of the powers of society, or, in other words, that form of government which is best contrived to secure an impartial and exact execution of the laws, is the best of republics." - Thoughts on Government, 1776

"There is no good government but what is republican. That the only valuable part of the British constitution is so; for the true idea of a republic is "an empire of laws, and not of men." That, as a republic is the best of governments, so that particular arrangement of the powers of society, or in other words, that form of government which is best contrived to secure an impartial and exact execution of the law, is the best of republics." - Thoughts on Government, 1776

"Fear is the foundation of most governments; but it is so sordid and brutal a passion, and renders men in whose breasts it predominates so stupid and miserable, that Americans will not be likely to approve of any political institution which is founded on it." - Thoughts on Government, 1776

"It is the duty of all men in society, publicly, and at stated seasons, to worship the SUPREME BEING, the great Creator and Preserver of the universe. And no subject shall be hurt, molested, or restrained, in his person, liberty, or estate, for worshipping GOD in the manner most agreeable to the dictates of his own conscience; or for his religious profession or sentiments; provided he doth not disturb the public peace, or obstruct others in their religious worship." - Thoughts on Government, 1776

"Government is instituted for the common good; for the protection, safety, prosperity, and happiness of the people; and not for profit, honor, or private interest of any one man, family, or class of men; therefore, the people alone have an incontestable, unalienable, and indefeasible right to institute government; and to reform, alter, or totally change the same, when their protection, safety, prosperity, and happiness require it." - Thoughts on Government, 1776

"The dignity and stability of government in all its branches, the morals of the people, and every blessing of society depend so much upon an upright and skillful administration of justice, that the judicial power ought to be distinct from both the legislative and executive, and independent upon both, that so it may be a check upon both, and both should be checks upon that." - Thoughts on Government, 1776

"Fear is the foundation of most governments." - Thoughts on Government, 1776

"It already appears, that there must be in every society of men superiors and inferiors, because God has laid in the constitution and course of nature the foundations of the distinction." - Thoughts on Government, 1776

"Wisdom and knowledge, as well as virtue, diffused generally among the body of the people, being necessary for the preservation of their rights and liberties, and as these depend on spreading the opportunities and advantages of education in the various parts of the country, and among the different orders of people, it shall be the duty of legislators and magistrates... to cherish the interest of literature and the sciences, and all seminaries of them." - Thoughts on Government, 1776

"Each individual of the society has a right to be protected by it in the enjoyment of his life, liberty, and property, according to standing laws. He is obliged, consequently, to contribute his share to the expense of this protection; and to give his personal service, or an equivalent, when necessary. But no part of the property of any individual can, with justice, be taken from him, or applied to public uses, without his own consent, or that of the representative body of the people. In fine, the people of this commonwealth are not controllable by any other laws than those to which their constitutional representative body have given their consent." - Thoughts on Government, 1776

"As good government is an empire of laws, how shall your laws be made? In a large society, inhabiting an extensive country, it is impossible that the whole should assemble to make laws. The first necessary step, then, is to depute power from the many to a few of the most wise and good." - Thoughts on Government, 1776

"The use of the Bible is so universal and its importance so great that your committee refers the above to the consideration of Congress, and if Congress shall not think it expedient to order the importation of types and paper, the Committee recommends that Congress will order the Committee of Commerce to import 20,000 Bibles from Holland, Scotland, or elsewhere, into the different parts of the States of the Union. Whereupon it was resolved accordingly to direct said Committee of Commerce to import 20,000 copies of the Bible." - On Committee to import bibles, September 11, 1777

"Let justice be done though the heavens should fall." - Letter to Elbridge Gerry, December 5, 1777