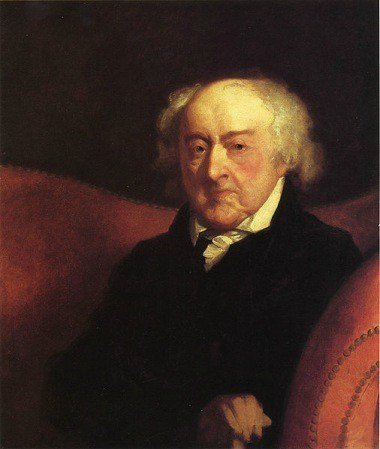 These Quotes by John Adams are from own letters from the last ten years of his life. Some of his correspondents include Thomas Jefferson, his son, John Quincy Adams, who would later become the 6th President of the United States and Josiah Quincy III, a member of the US House of Representatives, mayor of Boston and future President of Harvard University. Topics in these Quotes by John Adams include the impending death of his wife Abigail, the necessity of virtue for political liberty and the upcoming 50th Anniversary of the Declaration of Independence. These Quotes by John Adams are listed in chronological order with links to more before this time period at the bottom.

"My History of the Jesuits is in four volumes... This society has been a greater calamity to mankind than the French Revolution, or Napoleon's despotism or ideology. It has obstructed progress of reformation and the improvement of the human mind in society much longer and more fatally." - Letter to Thomas Jefferson, November 4, 1816

"Conclude not from all this that I have renounced the Christian religion... Far from it. I see in every page something to recommend Christianity in its purity, and something to discredit its corruptions... The ten commandments and the sermon on the mount contain my religion." - Letter to Thomas Jefferson, November 4, 1816

"We have now, it Seems a National Bible Society, to propagate King James's Bible, through all Nations. Would it not be better to apply these pious Subscriptions, to purify Christendom from the Corruptions of Christianity; than to propagate those Corruptions in Europe Asia, Africa and America!... Conclude not from all this, that I have renounced the Christian religion, or that I agree with Dupuis in all his Sentiments. Far from it. I see in every Page, Something to recommend Christianity in its Purity and Something to discredit its Corruptions. ...The Ten Commandments and the Sermon on the Mount contain my Religion." - Letter to Thomas Jefferson, November 4, 1816

"Let the human mind loose. It must be loose. It will be loose. Superstition and dogmatism cannot confine it." - Letter to John Quincy Adams, November 13, 1816

"As I understand the Christian religion, it was, and is, a revelation. But how has it happened that millions of fables, tales, legends, have been blended with both Jewish and Christian revelation that have made them the most bloody religion that ever exist." - Letter to Judge F. A. Van der Kemp, December 27, 1816

"Without religion this world would be something not fit to be mentioned in polite society, I mean hell. So far from believing in the total and universal depravity of human nature, I believe there is no individual totally depraved. The most abandoned scoundrel that ever existed, never yet wholly extinguished his conscience, and while conscience remains there is some religion." - Letter to Thomas Jefferson, April 19, 1817

"When people talk of the Freedom of Writing, Speaking, or thinking, I cannot choose but laugh. No such thing ever existed. No such thing now exists; but I hope it will exist. But it must be hundreds of years after you and I shall write and speak no more." - Letter to Thomas Jefferson, July 15, 1817

"Now, sir, for my griefs! The dear partner of my life for 54 years as a wife and for many more as a lover, now lies in extremis, forbidden to speak or to be spoken to... If human life is a bubble, no matter how soon it breaks, if it is, as I firmly believe, an immortal existence, we ought patiently to wait the instructions of the great Teacher. I am, Sir, your deeply afflicted friend, John Adams." - Letter to Thomas Jefferson, on Abigail's nearing death, October 7, 1818

"Abuse of words has been the great instrument of sophistry and chicanery, of party, faction, and division of society." - Letter to J. H. Tiffany, March 31, 1819

"Every measure of prudence, therefore, ought to be assumed for the eventual total extirpation of slavery from the United States... I have, through my whole life, held the practice of slavery in... abhorrence." - Letter to Robert J. Evans, June 8, 1819

"Have you ever found in history, one single example of a Nation thoroughly corrupted that was afterwards restored to virtue?... And without virtue, there can be no political liberty... Will you tell me how to prevent riches from becoming the effects of temperance and industry? Will you tell me how to prevent luxury from producing effeminacy, intoxication, extravagance, vice and folly?... I believe no effort in favour of virtue is lost..." - Letter to Thomas Jefferson, December 21, 1819

"That you and I shall meet in a better world, I have no more doubt than I have that we now exist on the same globe. If my natural reason did not convince me of this, Cicero's dream of Scipio, and his essays on friendship and old age, would have been sufficient for the purpose. But Jesus has taught us, that a future state is a social state, when he promised to prepare places in his Father's house of many mansions for his disciples." - Letter to Samuel Miller, July 8, 1820

"This oration will be read five hundred years hence with as much rapture as it was heard. It ought to be read at the end of every century, and indeed at the end of every year, forever and ever. (Regarding: Whatever makes men good Christians, makes them good citizens.)" - Speech at Plymouth, December 22, 1820

"Can a free government possibly exist with the Roman Catholic religion?" - Letter to Thomas Jefferson, May 19, 1821

You inquire why so young a man as Mr. Jefferson was placed at the head of the committee for preparing a Declaration of Independence? I answer: It was the Frankfort advice, to place Virginia at the head of everything. Mr. Richard Henry Lee might be gone to Virginia, to his sick family, for aught I know, but that was not the reason of Mr. Jefferson's appointment. There were three committees appointed at the same time, one for the Declaration of Independence, another for preparing articles of confederation, and another for preparing a treaty to be proposed to France. Mr. Lee was chosen for the Committee of Confederation, and it was not thought convenient that the same person should be upon both. Mr. Jefferson came into Congress in June, 1775, and brought with him a reputation for literature, science, and a happy talent of composition. Writings of his were handed about, remarkable for the peculiar felicity of expression. Though a silent member in Congress, he was so prompt, frank, explicit, and decisive upon committees and in conversation - not even Samuel Adams was more so - that he soon seized upon my heart; and upon this occasion I gave him my vote, and did all in my power to procure the votes of others. I think he had one more vote than any other, and that placed him at the head of the committee. I had the next highest number, and that placed me the second. The committee met, discussed the subject, and then appointed Mr. Jefferson and me to make the draft, I suppose because we were the two first on the list. The subcommittee met. Jefferson proposed to me to make the draft. I said, 'I will not,' 'You should do it.' 'Oh! no.' 'Why will you not? You ought to do it.' 'I will not.' 'Why?' 'Reasons enough.' 'What can be your reasons?' 'Reason first, you are a Virginian, and a Virginian ought to appear at the head of this business. Reason second, I am obnoxious, suspected, and unpopular. You are very much otherwise. Reason third, you can write ten times better than I can.' 'Well,' said Jefferson, 'if you are decided, I will do as well as I can.' 'Very well. When you have drawn it up, we will have a meeting.'" - Letter to Timothy Pickering, August 6, 1822

"We think ourselves possessed, or, at least, we boast that we are so, of liberty of conscience on all subjects, and of the right of free inquiry and private judgment in all cases, and yet how far are we from these exalted privileges in fact! There exists, I believe, throughout the whole Christian world, a law which makes it blasphemy to deny or doubt the divine inspiration of all the books of the Old and New Testaments, from Genesis to Revelations. In most countries of Europe it is punished by fire at the stake, or the rack, or the wheel. In England itself it is punished by boring through the tongue with a poker. In America it is not better; even in our own Massachusetts, which I believe, upon the whole, is as temperate and moderate in religious zeal as most of the States, a law was made in the latter end of the last century, repealing the cruel punishments of the former laws, but substituting fine and imprisonment upon all those blasphemers upon any book of the Old Testament or New. Now, what free inquiry, when a writer must surely encounter the risk of fine or imprisonment for adducing any argument for investigating into the divine authority of those books? Who would run the risk of translating Dupuis? But I cannot enlarge upon this subject, though I have it much at heart. I think such laws a great embarrassment, great obstructions to the improvement of the human mind. Books that cannot bear examination, certainly ought not to be established as divine inspiration by penal laws. It is true, few persons appear desirous to put such laws in execution, and it is also true that some few persons are hardy enough to venture to depart from them. But as long as they continue in force as laws, the human mind must make an awkward and clumsy progress in its investigations. I wish they were repealed. The substance and essence of Christianity, as I understand it, is eternal and unchangeable, and will bear examination forever, but it has been mixed with extraneous ingredients, which I think will not bear examination, and they ought to be separated." - Letter to Thomas Jefferson, January 23, 1825

"No man who ever held the office of president would congratulate a friend on obtaining it. He will make one man ungrateful, and a hundred men his enemies, for every office he can bestow." - Letter to Josiah Quincy III, February 14, 1825

"My best wishes, in the joys, and festivities, and the solemn services of that day on which will be completed the fiftieth year from its birth, of the independence of the United States: a memorable epoch in the annals of the human race, destined in future history to form the brightest or the blackest page, according to the use or the abuse of those political institutions by which they shall, in time to come, be shaped by the human mind." - Reply to an invitation to 50th Independence Day celebrations from the citizens of Quincy, Massachusetts, June 7, 1826

"Public affairs go on pretty much as usual: perpetual chicanery and rather more personal abuse than there used to be... Our American Chivalry is the worst in the world. It has no Laws, no bounds, no definitions; it seems to be all a Caprice." - Letter to Thomas Jefferson, April 17, 1826

"Independence forever." - Last public words as a toast for the celebration of the fiftieth anniversary of the Declaration of Independence, July 4, 1826

"If it be the pleasure of Heaven that my country shall require the poor offering of my life, the victim shall be ready, at the appointed hour of sacrifice, come when that hour may. But while I do live, let me have a country, and that a free country!" - As recorded by Daniel Webster