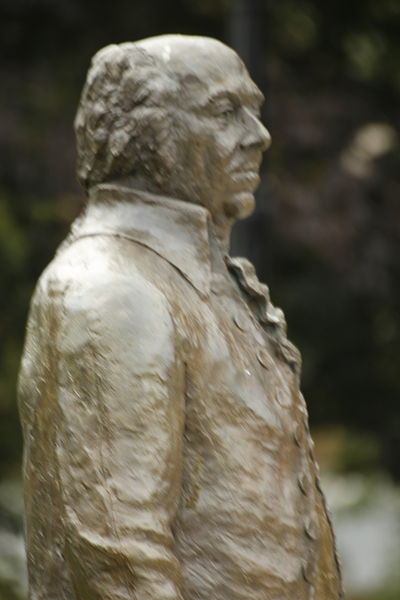 Our John Adams Quotes come from his own letters, writings and diary entries. They provide a window into the mind of this great leader of the American Revolution who was destined to become the second President. Our quotes are listed chronologically and the ones on this page cover 1777-1791, which covers the latter part of the Revolution and the early period of the new republic.

Many of these quotes are from personal letters to such figures as Thomas Jefferson, Abigail Adams and James Warren and works such as A Defense of the Constitutions of the Government of the United States of America, his extensive review of the history of Constitutional Republics and how they influenced the founders to create the US Constitution. These John Adams Quotes are listed in chronological order and there are links to more before and after this period at the bottom.

"I have had many Opportunities, in the Course of this journey, to observe, how deeply rooted, our righteous Cause is in the Minds of the People -- and could write you many Anecdotes in Proof of it. But I will reserve them for private Conversation. But on 2d Thoughts why should I? One Evening, as I sat in one Room, I overheard Company of the Common sort of People in another, conversing upon serious subjects. One of them, whom I afterwards found upon Enquiry to be a reputable, religious Man, was more eloquent than the rest-he was upon the Danger of despizing and neglecting serious Things. Said whatever Person or People made light of them would soon find themselves terribly mistaken. At length I heard these Words -- "it appears to me the eternal son of God is operating Powerfully against the British Nation for their treating lightly serious Things." One Morning, I asked my Landlady what I had to pay? Nothing she said -- "I was welcome, and she hoped I would always make her House my Home, and she should be happy to entertain all those Gentlemen who had been raised up by Providence to be the Saviours of their Country." This was flattering enough to my vain Heart. But it made a greater Impression on me, as a Proof, how deeply this Cause had sunk into the Minds and Hearts of the People. -- In short every Thing I see and hear, indicates the same Thing." - Letter to Abigail Adams, December 15, 1777

"In vain are Schools, Academies, and Universities instituted, if loose Principles and licentious habits are impressed upon Children in their earliest years... The Vices and Examples of the Parents cannot be concealed from the children. How is it possible that Children can have any just Sense of the sacred Obligations of Morality or Religion if, from their earliest Infancy, they learn their Mothers live in habitual Infidelity to their fathers, and their fathers in as constant Infidelity to their Mothers?" - Diary Entry, June 2, 1778

"The idea of infidelity (disbelief in the God inspired nature of Christianity) cannot be treated with too much resentment or too much horror. The man who can think of it with patience is a traitor in his heart and ought to be execrated as one who adds the deepest hypocrisy to the blackest treason." - Letter to James Warren, August 4, 1778

"As no truth is more clearly taught in the Volume of Inspiration, nor any more fully demonstrated by the experience of all ages, than that a deep sense and a due acknowledgement of the growing providence of a Supreme Being and of the accountableness of men to Him as the searcher of hearts and righteous distributer of rewards and punishments are conducive equally to the happiness of individuals and to the well-being of communities... I have thought proper to recommend, and I hereby recommend accordingly, that Thursday, the twenty-fifth day of April next, be observed throughout the United States of America as a day of solemn humiliation, fasting and prayer; that the citizens on that day abstain, as far as may be, from their secular occupation, and devote the time to the sacred duties of religion, in public and in private; that they call to mind our numerous offenses against the most high God, confess them before Him with the sincerest penitence, implore his pardoning mercy through the Great Mediator and Redeemer, for our past transgressions, and that through the grace of His Holy Spirit, we may be disposed and enabled to yield a more suitable obedience to his righteous requisitions in time to come; that He would interpose to arrest the progress of that impiety and licentiousness in principle and practice so offensive to Himself and so ruinous to mankind; that He would make us deeply sensible that "righteousness exalteth a nation but sin is a reproach to any people." - Call for National Fast Day, March 6, 1779

"By my physical constitution I am but an ordinary man... Yet some great events, some cutting expressions, some mean hypocracies, have at times thrown this assemblage of sloth, sleep, and littleness into rage like a lion." - Diary entry, April 26, 1779

"I must study politics and war that my sons may have liberty to study mathematics and philosophy. My sons ought to study mathematics and philosophy, geography, natural history, naval architecture, navigation, commerce, and agriculture, in order to give their children a right to study painting, poetry, music architecture, statuary, tapestry, and porcelain." - Letter to Abigail Adams, May 12, 1780

"The right of a nation to kill a tyrant in case of necessity can no more be doubted than to hang a robber, or kill a flea." - Constitution of Massachusetts, Declaration of Rights, 1780

"It has ever been my hobby-horse to see rising in America an empire of liberty, and a prospect of two or three hundred millions of freemen, without one noble or one king among them. You say it is impossible. If I should agree with you in this, I would still say, let us try the experiment, and preserve our equality as long as we can. A better system of education for the common people might preserve them long from such artificial inequalities as are prejudicial to society, by confounding the natural distinctions of right and wrong, virtue and vice." - Letter to Count Sarsfield, February 3, 1786

"All the perplexities, confusions, and distresses in America arise, not from defects in their constitution or confederation, not from a want of honor or virtue, so much as from downright ignorance of the nature of coin, credit, and circulation." - Letter to Thomas Jefferson, August 25, 1787

"The moment the idea is admitted into society that property is not as sacred as the laws of God, and that there is not a force of law and public justice to protect it, anarchy and tyranny commence. If Thou shalt not covet' and `Thou shalt not steal' were not commandments of Heaven, they must be made inviolable precepts in every society before it can be civilized or made free." - A Defense of the Constitutions of Government of the United States of America, 1787

"The rich, the well-born, and the able, acquire an influence among the people that will soon be too much for simple honesty and plain sense, in a house of representatives. The most illustrious of them must, therefore, be separated from the mass, and placed by themselves in a senate; this is, to all honest and useful intents, an ostracism." - A Defence of the Constitutions of Government of the United States of America, Vol. 1, Preface, p. xi, 1787

"Children should be educated and instructed in the principles of freedom." - A Defense of the Constitutions of Government of the United States of America, 1787

"The proposition that the people are the best keepers of their own liberties is not true. They are the worst conceivable, they are no keepers at all; they can neither judge, act, think, or will, as a political body." - A Defense of the Constitution of the Government of the United States of America, 1787

"To suppose arms in the hands of citizens, to be used at individual discretion, except in private self-defense, or by partial orders of towns, counties or districts of a state, is to demolish every constitution, and lay the laws prostrate, so that liberty can be enjoyed by no man; it is a dissolution of the government. The fundamental law of the militia is, that it be created, directed and commanded by the laws, and ever for the support of the laws." - A Defense of the Constitutions of the Government of the United States of America, 1787-1788

"The deliberate union of so great and various a people in such a place, is without all partiality or prejudice, if not the greatest exertion of human understanding, the greatest single effort of national deliberation that the world has ever seen." - Quoted in a letter from Rufus King to Theophilus Parsons, February 20, 1788

"There is nothing which I dread so much as a division of the republic into two great parties, each arranged under its leader, and concerting measures in opposition to each other. This, in my humble apprehension, is to be dreaded as the greatest political evil under our Constitution." - Letter to Jonathan Jackson, October 2, 1789

"A desire to be observed, considered, esteemed, praised, beloved, and admired by his fellows is one of the earliest, as well as the keenest dispositions discovered in the heart of man." - Discourses on Davila, No. 4, 1790-1791

"The world grows more enlightened. Knowledge is more equally diffused. Newspapers, magazines, and circulating libraries have made mankind wiser. Titles and distinctions, ranks and orders, parade and ceremony, are all going out of fashion." - Discourses on Davila, No. 13, 1790-1791

"This is roundly and frequently asserted in the streets, and sometimes on theatres of higher rank. Some truth there is in it; and if the opportunity were temperately improved, to the reformation of abuses, the rectification of errors, and the dissipation of pernicious prejudices, a great advantage it might be. But, on the other hand, false inferences may be drawn from it, which may make mankind wish for the age of dragons, giants, and fairies." - Discourses on Davila, No. 13, 1790-1791