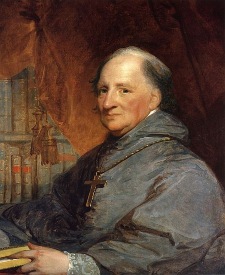 On this day in history, November 6, 1789, John Carroll was appointed the first Catholic bishop in the United States. Carroll was born in Upper Marlboro, Maryland and was trained in the ministry in France, becoming a member of the Society of Jesus. He returned to the US as a Catholic missionary in 1773.

In 1776, Carroll was asked to go on a mission to Canada by the Continental Congress to ask for Canada's cooperation in their rebellion against England. Charles Carroll, John Carroll's cousin and Samuel Chase, both Maryland signers of the Declaration of Independence, along with Benjamin Franklin were also members of the delegation. Their mission failed and Canada remained on the side of the British.