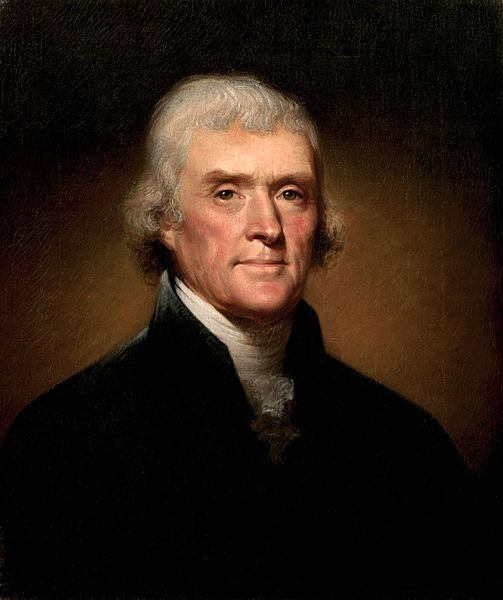 Thomas Jefferson Famous Quotes from his own letters, writings and speeches. These quotes are from the last two years of Jefferson's life, including the last words he spoke and the words he personally wrote for the epitaph on his gravestone. Jefferson died on July 4th, 1826, the 50th anniversary of the Declaration of Independence, the same day that former President John Adams died as well. These Thomas Jefferson Famous Quotes cover such topics as his personal thoughts on Patrick Henry, his hope that slavery will soon be abolished and advice on practical living. Thomas Jefferson was one of the great leaders of the American Revolution. He wrote the Declaration of Independence, became Ambassador to France, Secretary of State, Vice President and the 3rd President of the United States. Our Thomas Jefferson Famous Quotes are listed in chronological order and their are links to more before this period at the bottom of the page.

"With respect to our state and federal governments, I do not think their relations correctly understood by foreigners. They generally suppose the former subordinate to the latter. But this is not the case. They are co-ordinate departments of one simple and integral whole. To the state governments are reserved all legislation administration, in affairs which concern their own citizens only; and to the federal government is given whatever concerns foreigners and citizens of other states; these functions alone being made federal. The one is the domestic, the other the foreign branch of the same government - neither having control over the other, but within its own department." - Letter to Major John Cartwright, June 5, 1824

"Men by their constitutions are naturally divided into two parties:

"I think myself that we have more machinery of government than is necessary, too many parasites living on the labor of the industrious." - Letter to William Ludlow, September 6, 1824

"His temper was excellent, and he generally observed decorum in debate. On one or two occasions I have seen him angry, and his anger was terrible; those who witnessed it, were not disposed to rouse it again." - On Patrick Henry, December, 1824

- A Decalogue of Canons for Observation in Practical Life, February 21, 1825

"This letter will, to you, be as one from the dead. The writer will be in the grave before you can weigh its counsels. Your affectionate and excellent father has requested that I would address to you something which might possibly have a favorable influence on the course of life you have to run; and I too, as a namesake, feel an interest in that course. Few words will be necessary, with good dispositions on your part. Adore God. Reverence and cherish your parents. Love your neighbor as yourself, and your country more than yourself. Be just. Be true. Murmur not at the ways of Providence. So shall the life into which you have entered be the portal to one of eternal and ineffable bliss. And if to the dead it is permitted to care for the things of this world, every action of your life will be under my regard. Farewell." - Letter to Thomas Jefferson Smith, February 21, 1825

"I hope (the University of Virginia) will prove a blessing to my own state, and not unuseful perhaps to some others." - Letter to Edward Livingston, March 25, 1825

"This was the object of the Declaration of Independence. Not to find out new principles, or new arguments, never before thought of, not merely to say things which had never been said before; but to place before mankind the common sense of the subject, in terms so plain and firm as to command their assent, and to justify ourselves in the independent stand we are compelled to take. Neither aiming at originality of principle or sentiment, nor yet copied from any particular and previous writing, it was intended to be an expression of the American mind, and to give to that expression the proper tone and spirit called for by the occasion." - Letter to Henry Lee, May 8, 1825

"At the age of eighty-two, with one foot in the grave and the other uplifted to follow it, I do not permit myself to take part in any new enterprises, even for bettering the condition of man, not even in the great one which is the subject of your letter and which has been through life that of my greatest anxieties. The march of events has not been such as to render its completion practicable with the limits of time allotted to me; and I leave its accomplishment as the work of another generation. And I am cheered when I see that on which it is devolved, taking it up with so much good will and such minds engaged in its encouragement. The abolition of the evil is not impossible; it ought never therefore to be despaired of. Every plan should be adopted, every experiment tried, which may do something towards the ultimate object." - On the Abolition of Slavery, Letter to Miss Frances Wright, August 7, 1825

"The good old Dominion, the blessed mother of us all." - Thoughts on Lotteries, 1826

"On the question of the lawfulness of slavery, that is of the right of one man to appropriate to himself the faculties of another without his consent, I certainly retain my early opinions." - Letter to Edward Everett, April 8, 1826

"May it be to the world, what I believe it will be, (to some parts sooner, to others later, but finally to all), the signal of arousing men to burst the chains under which monkish ignorance and superstition had persuaded them to bind themselves, and to assume the blessings and security of self-government." - Letter to Roger C. Weightman, about the decision for Independence, June 24, 1826

"All eyes are opened, or opening, to the rights of man. The general spread of the light of science has already laid open to every view the palpable truth, that the mass of mankind has not been born with saddles on their backs, nor a favored few booted and spurred, ready to ride them legitimately, by the grace of God. These are grounds of hope for others. For ourselves, let the annual return of this day forever refresh our recollections of these rights, and an undiminished devotion to them." - Letter to Roger C. Weightman, declining to attend 50th anniversary of Independence day because of his health, this was Jefferson's last letter, he died on July 4th, 1826, June 24, 1826

"This is the Fourth?" - Last words, 50th anniversary of signing Declaration of Independence, July 4, 1826

"Here was buried Thomas Jefferson, author of the Declaration of American Independence, of the Statute of Virginia for Religious Freedom, and Father of the University of Virginia." - Thomas Jefferson's self-written epitaph, July 4, 1826