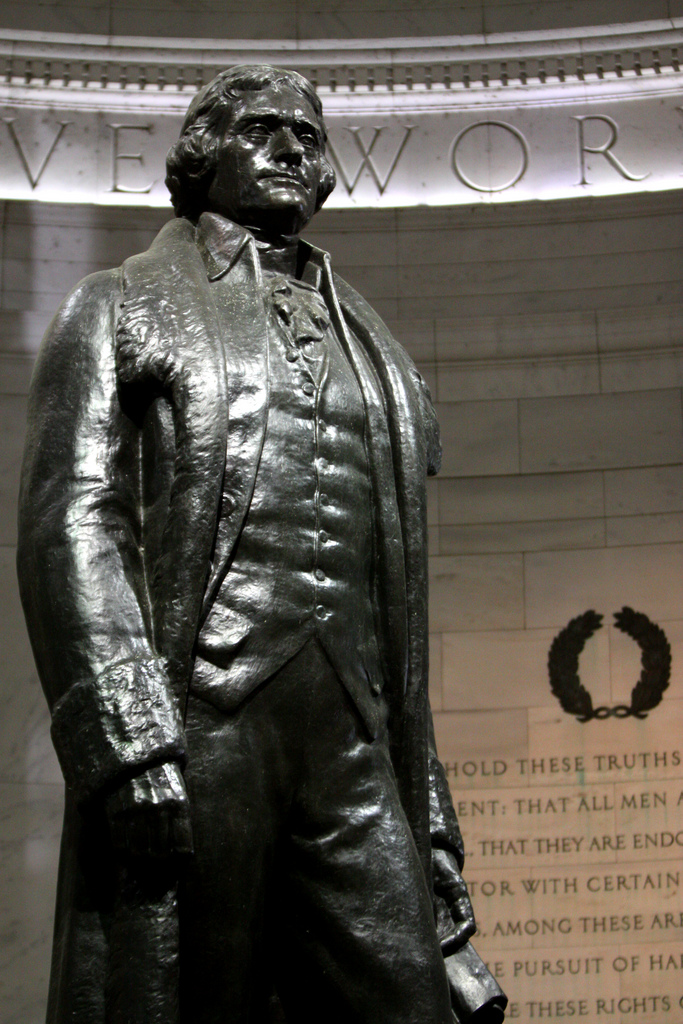 These famous Thomas Jefferson Quotes come from his own letters, writings and speeches from 1801-1802. This period covers the first two years of Jefferson's first term as President. These Thomas Jefferson Quotes come from correspondence with such influential people as John Dickinson, Elbridge Gerry, a future vice-president and Francis Hopkinson, alleged creator of the 13 Star Flag. These quotes also include Jefferson's famous letter to the Danbury Baptist Association. This letter is the source of the phrase "separation of church and state." Note that the phrase is not found in the US Constitution. The context of the phrase is that Jefferson was assuring the Danbury Baptists that the government would not choose one Christian denomination as an official state church. He was not, as is commonly believed, saying that public expressions of faith were "unconstitutional." These Thomas Jefferson Quotes are listed chronologically with links to more both before and after this period at the bottom of the page.

"Equal and exact justice to all men, of whatever state or persuasion, religious or political; peace, commerce, and honest friendship with all nations, entangling alliances with none... Freedom of religion; freedom of the press, and freedom of person under the protection of the habeus corpus, and trial by juries impartially selected. These principles form the bright constellation which has gone before us, and guided our steps through an age of revolution and reformation. The wisdom of our sages and the blood of our heroes have been devoted to their attainment. They should be the creed of our political faith, the text of civil instruction, the touchstone by which we try the services of those we trust; and should we wander from them in moments of error or alarm, let us hasten to retrace our steps and to regain the road which alone leads to peace, liberty, and safety." - First Inaugural Address, March 4, 1801

"I never submitted the whole system of my opinions to the creed of any party of men whatever in religion, in philosophy, in politics, or in anything else where I was capable of thinking for myself. Such an addiction is the last degradation of a free and moral agent." - Letter to Francis Hopkinson, March 4, 1801

"Those who live by mystery & charlatanerie, fearing you would render them useless by simplifying the Christian philosophy, -- the most sublime & benevolent, but most perverted system that ever shone on man, -- endeavored to crush your well-earnt & well-deserved fame." - Letter to Dr. Joseph Priestly, March 21, 1801

"The Christian Religion, when divested of the rags in which they (the clergy) have enveloped it, and brought to the original purity and simplicity of its benevolent institutor, is a religion of all others most friendly to liberty, science, and the freest expansion of the human mind." - Letter to Moses Robinson, March 23, 1801

"The Constitution on which our Union rests, shall be administered by me (as President) according to the safe and honest meaning contemplated by the plain understanding of the people of the United States at the time of its adoption - a meaning to be found in the explanations of those who advocated, not those who opposed it, and who opposed it merely lest the construction should be applied which they denounced as possible." - Letter to Messrs. Eddy, Russel, Thurber, Wheaton and Smith, March 27, 1801

"The steady character of our countrymen is a rock to which we may safely moor; and notwithstanding the efforts of the papers to disseminate early discontents, I expect that a just, dispassionate and steady conduct, will at length rally to a proper system the great body of our country. Unequivocal in principle, reasonable in manner, we shall be able I hope to do a great deal of good to the cause of freedom & harmony." - Letter to Elbridge Gerry, March 29, 1801

"Of the various executive abilities, no one excited more anxious concern than that of placing the interests of our fellow-citizens in the hands of honest men, with understanding sufficient for their stations. No duty is at the same time more difficult to fulfil. The knowledge of character possessed by a single individual is of necessity limited. To seek out the best through the whole Union, we must resort to the information which from the best of men, acting disinterestedly and with the purest motives, is sometimes incorrect... No duty the Executive had to perform was so trying as to put the right man in the right place." - Letter to Elias Shipman, July 12, 1801

"If a due participation of office is a matter of right, how are vacancies to be obtained? Those by death are few; by resignation, none." - Letter to Elias Shipman, July 12, 1801

"The greatest good we can do our country is to heal its party divisions and make them one people." - Letter to John Dickinson, July 23, 1801

"Born in other countries, yet believing you could be happy in this, our laws acknowledge, as they should do, your right to join us in society, conforming, as I doubt not you will do, to our established rules. That these rules shall be as equal as prudential considerations will admit, will certainly be the aim of our legislatures, general and particular." - Letter to Hugh White, May 2, 1801

"The liberty to worship our Creator in the way we think most agreeable to His will is a liberty deemed in other countries incompatible with good government and yet proved by our experience to be its best support." - Letter to Captain John Thomas, November 18, 1801

"I join cordially in admiring and revering the Constitution of the United States, the result of the collected wisdom of our country. That wisdom has committed to us the important task of proving by example that a government, if organized in all its parts on the Representative principle unadulterated by the infusion of spurious elements, if founded, not in the fears & follies of man, but on his reason, on his sense of right, on the predominance of the social over his dissocial passions, may be so free as to restrain him in no moral right, and so firm as to protect him from every moral wrong." - Letter to Amos Marsh, November 20, 1801

"Gentlemen,-The affectionate sentiments of esteem and approbation which you are so good as to express towards me on behalf of the Danbury Baptist Association give me the highest satisfaction... Believing with you that religion is a matter which lies solely between man and his God; that he owes account to none other for his faith or his worship; that the legislative powers of government reach actions only and not opinions, I contemplate with sovereign reverence that act of the whole American people which declared that their legislature should "make no law respecting an establishment of religion or prohibiting the free exercise thereof," thus building a wall of separation between Church and State. Adhering to this expression of the supreme will of the nation in behalf of the rights of conscience, I shall see with sincere satisfaction the progress of those sentiments which tend to restore to man all his natural rights, convinced he has no natural right in opposition to his social duties. I reciprocate your kind prayers for the protection and blessing of the common Father and Creator of man, and tender you for yourselves and your religious association assurances of my high respect and esteem." - Letter to Danbury Baptist Association, January 1, 1802

"Newspapers... serve as chimnies to carry off noxious vapors and smoke." - Letter to Thaddeus Kosciusko, April 2, 1802

"One passage in the paper you enclosed me must be corrected. It is the following, "And all say it was yourself more than any other individual, that planned and established it," i.e., the Constitution. I was in Europe when the Constitution was planned, and never saw it till after it was established. On receiving it I wrote strongly to Mr. Madison, urging the want of provision for the freedom of religion, freedom of the press, trial by jury, habeas corpus, the substitution of militia for a standing army, and an express reservation to the States of all rights not specifically granted to the Union. He accordingly moved in the first session of Congress for these amendments, which were agreed to and ratified by the States as they now stand. This is all the hand I had in what related to the Constitution." - Letter to Dr. Joseph Priestly, June 19, 1802

"If we can prevent the government from wasting the labors of the people, under the pretence of taking care of them, they must become happy." - Letter to Thomas Cooper, November 29, 1802