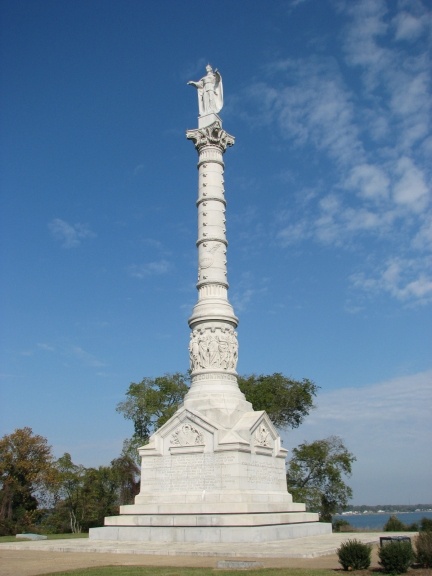 On This Day in History, October 29, 1781, the Continental Congress authorizes the Yorktown Victory Monument at York, Virginia, to remember the surrender of Lord Cornwallis and the British army, news of which had just reached the Congress in Philadelphia. The monument was not even begun for 100 years and was started during the centennial celebration of the victory in 1881.

Congress' original resolution to erect the monument reads as follows: "That the United States in Congress assembled, will cause to be erected at York, in Virginia, a marble column, adorned with emblems of the alliance between the United States and his Most Christian Majesty; and inscribed with a succinct narrative of the surrender of earl Cornwallis to his excellency General Washington, Commander in Chief of the combined forces of America and France; to his excellency the Count de Rochambeau, commanding the auxiliary troops of his most Christian Majesty in America, and his excellency the Count de Grasse, commanding in chief the naval army of France in the Chesapeake."

Notice the emphasis on French involvement during the war. If it hadn't been for French cooperation, the war likely would have been lost, a fact not known by many Americans. The Yorktown Victory Monument was finished in 1884. The main pillar is 84 feet tall and the statue of the Lady Victory is 14 feet on top of that. The statue was replaced in 1956 after the original was damaged by lightning. Today the monument can be found on the southeast end of Main Street in Yorktown, Virginia.

Each of the four sides of the base of the monument contain an inscription: 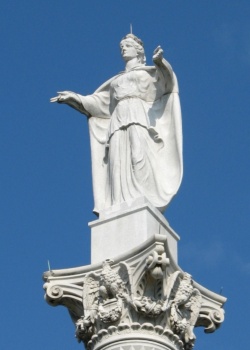 The treaty concluded Feb 6 1778 between the U.S.A. and Louis XVI King of France declares the essential & direct end of the present defensive alliance is to maintain effectually the liberty & sovereignty & independence absolute & unlimited of the said U.S. as well in matters of government as of commerce

Erected in pursuance of a resolution of Congress adopted Oct 29 1781 & an act of congress approved June 7 1880 to commemorate the victory by which the independence of the U.S.A. was achieved