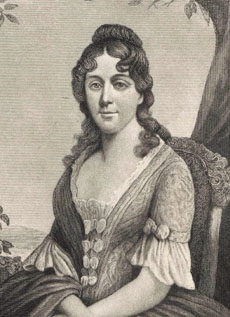 On this day in history, October 30, 1748, Martha Wayles Skelton is born. She would later become the wife of Thomas Jefferson. If you look for images of Martha Jefferson, you are only likely to find drawings of her like this one. This might seem strange at first. Wouldn't the wife of one of the earliest Presidents have sat for a portrait? We have portraits of Martha Washington and Abigail Adams, Dolly Madison, Elizabeth Monroe and Louisa Adams. The truth is that Martha died 18 years before Jefferson became President so she was never the famous figure in her lifetime that she would have been had she become the First Lady. Thomas Jefferson never did remarry so he was single when he was President.

Martha Jefferson had been married once before her marriage to Thomas Jefferson, but her husband had died young. They had one child, but he died as a toddler. Martha apparently had frequent health problems. She and Jefferson had six children, only two of whom lived to adulthood and only one of them survived past age 25.

Little is known about Martha's education but according eyewitnesses she was musically talented and an avid reader. She helped Martha Washington raise $300,000 for shirts for the Continental Army during the American Revolution. Martha died shortly after the birth of her last child sending Jefferson into an inconsolable grief that took him months to come out of.