On this day in history, November 4, 1778, French Admiral Charles Hector, Count D'Estaing, left Boston for the West Indies. This was a great blow to the Americans who were counting on French involvement to help them win the war against Great Britain. France had joined the Americans earlier in the year and D'Estaing's arrival in July with sixteen ships had brought great hope to the Americans. 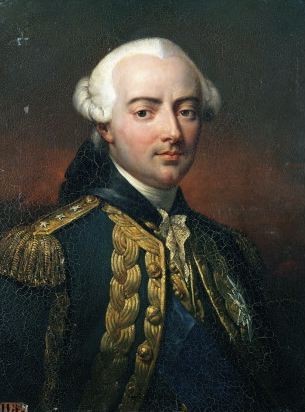 D'Estaing's first mission was to blockade the British fleet in the Delaware River, but the British had evacuated Philadelphia and the fleet returned to New York before D'Estaing's arrival. D'Estaing then sailed for New York, but was not able to cross the shallow sandbars into New York Harbor. With the consultation of American generals, D'Estaing then sailed for British occupied Newport, Rhode Island, where he was to assist the Americans in ousting the British from the city.

Admiral D'Estaing began to unload his 4,000 soldiers to help the Americans in the Battle of Rhode Island, but took them back on board when another British fleet arrived. He then attempted to engage the British fleet, but a storm arose that lasted for two days, heavily damaging and scattering both fleets. The British fleet returned to New York for repairs. D'Estaing regathered and returned to Newport to tell the generals that his fleet was too damaged to be of any help. He sailed for Boston for repairs, much to the consternation of the Americans. In Boston, D'Estaing was assailed as a "deserter."

On November 4, the Americans were even more distressed when D'Estaing sailed for the West Indies to help in the war against Britain there instead. He returned briefly to America to help with an attack against British occupied Savannah, Georgia in September, but this mission failed also and D'Estaing returned to France. The Americans were bereft of French naval help until the arrival of Admiral Charles-Henri-Louis d'Arsac de Ternay at Newport in May, 1780.

Return to top of Admiral D'Estaing leaves for the West Indies