On this day in history, November 5, 1780, a Revolutionary War battle known as De la Balme's Defeat or De la Balme's Massacre takes place when retired French cavalry officer Augustin de la Balme is killed near present day Fort Wayne, Indiana in a battle with Miami Indians. The officer had been appointed in 1777 as the Continental Army's Inspector of Cavalry, but resigned this position due to his dislike for Polish General Casimir Pulaski, the Commander of the United States Cavalry.

In 1780, De la Balme left on a voyage down the Ohio River on a mission to capture the British Fort Detroit. Historians are uncertain whether he undertook this mission on his own or if he was acting on secret orders from General George Washington. De la Balme gathered Canadian colonists who had been living under British rule along the way in Kaskaskia, Cahokia, and Vincennes (in what is now Indiana). 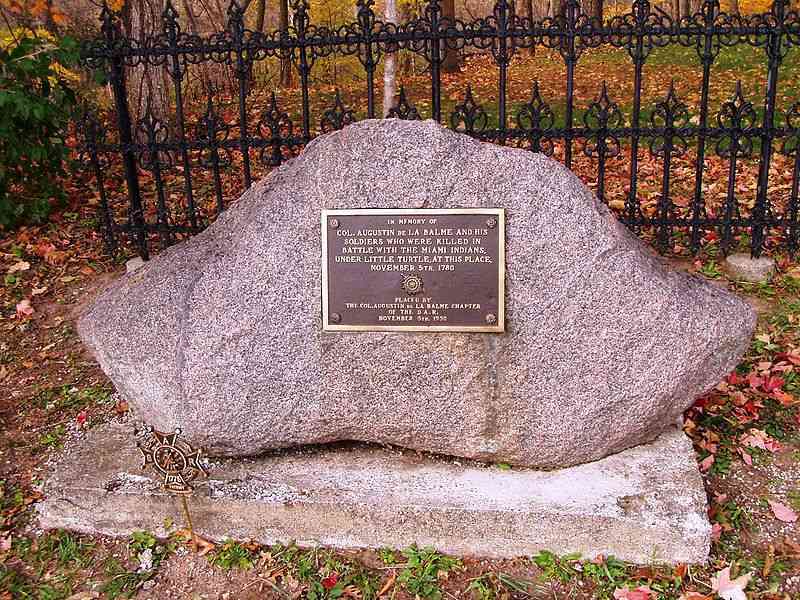 De la Balme's men moved north toward Fort Detroit and when they arrived in Kekionga (modern day Fort Wayne, Indiana), they found an unoccupied British and Indian trading post, the British and their Miami Indian allies having left the post, apparently on a hunting mission. De la Balme occupied the post and began to raid other British posts in the area. On the 5th, De la Balme set out for a post along the Eel River.

In the meantime, a group of Miami hunters returned to Kekionga, killed the 20 men De la Balme had left there and spread the word among the local Indians. Chief Little Turtle, who lived on the Eel River nearby, attacked De la Balme's party before he could reach the trading post. de la Balme's men entrenched themselves along the river, but were eventually overcome. De la Balme and most of his men were killed, with only a few escaping to tell the tale.

Chief Little Turtle would go on to become a successful war chief against the Americans in the Northwest Indian Wars of the 1790s and, in spite of De la Balme's failure, the British would post a group of Rangers at Kekionga to protect it from further attack. Fort Detroit would remain in British possession until the signing of the Jay Treaty in 1794.