On this day in history, July 9, 1776, the Declaration of Independence is read to the troops in New York City. After voting for independence on July 2nd and voting on the language for their public declaration on July 4th, the Continental Congress ordered that copies of the document be printed and sent to provincial and military leaders around the colonies.

John Hancock, who was then the President of Congress, had one copy of the Declaration of Independence mailed to George Washington with instructions to have it read to his troops however he saw fit. Washington was then in New York City preparing for battle with the British. 10,000 British soldiers had already landed on Staten Island in preparation for invading New York and many more would soon arrive. Nearly 30,000 colonial soldiers had assembled in the area. 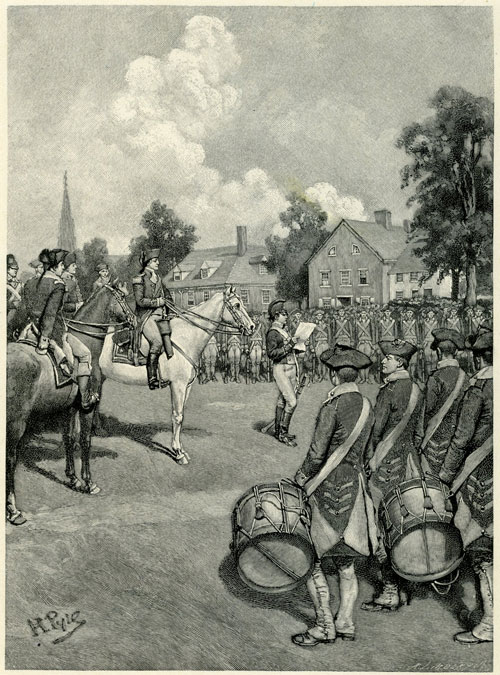 Washington and many others had been waiting for a declaration of independence for some time, while efforts at reconciliation were made by those reluctant to rebel against the Crown. While some waited for peace commissioners to arrive from England, Washington famously stated that the only people coming from Europe were Hessian soldiers.

Washington was elated upon receiving the Declaration of Independence. He immediately sent out orders that all the troops should be assembled on their parade grounds at 6pm on July 9th. The parade grounds were on New York's Commons, which is very near today's City Hall. 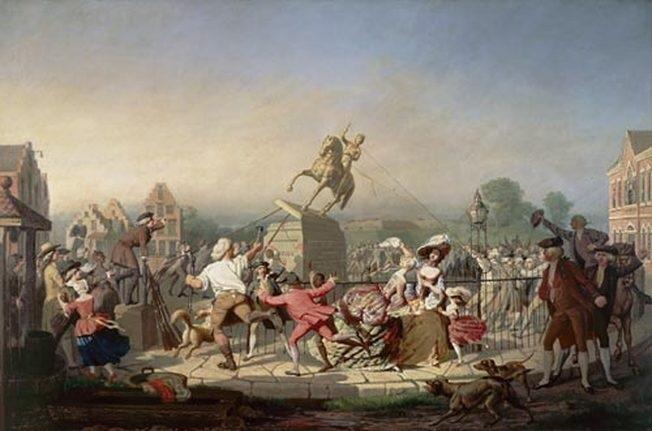 Pulling Down the Statue of King George III by Howard Pyle

Washington's order explaining the purpose for the gathering was read first... "The Continental Congress, impelled by the dictates of duty, policy and necessity, [have] been pleased... to declare the United Colonies of North America, free and independent States." Afterwards, the Declaration was read to each regiment by their generals or other officers.

Numerous citizens came out for the reading as well, which sparked a celebration through the streets. Led by Isaac Sears, one of New York's leading patriots, the crowd, including many soldiers, rushed to the Bowling Green where a large equestrian statue of King George III stood. The 4,000 pound lead statue was torn down and the head cut off. The iron fence surrounding the Green had posts topped with little crowns, all of which were sawed off as well. The horse statue was cut in pieces and shipped to Connecticut to get it away from the British, who could melt it down for bullets.

The statue ended up at the home of General Oliver Wolcott, where it was melted down and cast into 42,088 bullets. Curiously though, this amount of metal should have produced twice as many bullets. For many years, the reason for so few bullets was not known, but over the decades, pieces of the statue began to appear, especially buried in the yards of homes owned by Tories during the war and near to General Wolcott's home. It is believed that Tories were spiriting off bits of the statue as they could to prevent them from being cast into bullets to be used against the British.

The head of the statue was allegedly taken by Tories on the night of July 9th and made its way to England where Thomas Hutchinson confirmed that he saw it in the home of Lord Charles Townshend. George Washington, by the way, expressed displeasure at the destruction of property, writing in his diary the next day he hoped in the future people would leave this sort of thing "to the proper authorities."