On this day in history, July 12, 1776, Admiral Howe's fleet arrives at Staten Island. This fleet, along with other ships arriving before and after, carried the largest British expeditionary force to ever be assembled. Along with other British ships in the waters of North America, it was also the largest amphibious assault force in European history.

After abandoning Boston in March, 1776, the British high command set its sights on New York. Orders were sent to several fleets to converge at New York in the summer. On June 29th, the first ships arrived off Sandy Hook, New Jersey. Within 2 days, 48 ships arrived, carrying over 10,000 British troops, along with General William Howe, the general in charge of the war. New Yorkers were astonished. A larger fleet of ships had never before been seen in North America. Some reported that the ships' masts looked like a "forest of pines" spread across the bay. 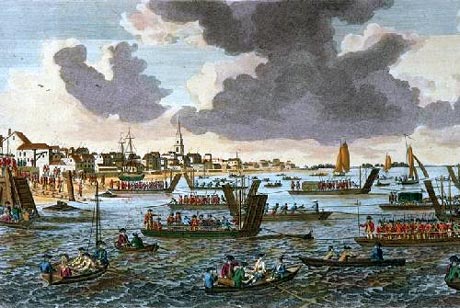 General Howe hoped to land his troops at Gravesend on the west end of Long Island, but, finding the Continental Army firmly ensconced there, his troops began disembarking on Staten Island. This, however, was only the beginning of the British invasion. On July 12, Admiral, Lord Richard Howe, General Howe's brother, arrived at Staten Island with an even more massive fleet. 82 more ships arrived, carrying multiplied thousands of troops and sailors. Admiral Howe immediately started unloading his troops on Staten Island where he met with his brother to plan efforts to offer the colonists amnesty if they would renounce their rebellion. 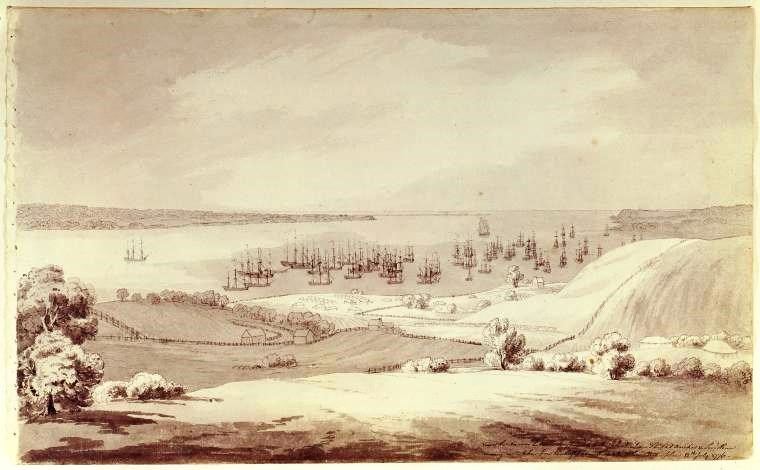 A View of the Narrows between Long Island and Staten Island, with Our Fleet at Anchor and Lord Howe Coming In by Lieutenant Archibald Robertson

On August 12th, another fleet arrived, carrying hired Hessian soldiers from Germany. Yet another fleet, under the direction of Commodore, Sir Peter Parker, and carrying Lieutenant General Charles Cornwallis and 3,000 more troops, arrived on August 15th. In all, 32,000 British and Hessian soldiers and 10,000 sailors had converged on Staten Island, supported by 30 warships and nearly 300 transports and supply ships.

After several failed peace overtures, the anticipated British attack came at Long Island in August. The Americans lost the Battle of Long Island on the 27th and were driven back to Manhattan. New York City was captured on September 15th and the Continental Army was completely driven off Manhattan on November 15th after the Battle of Fort Washington.

The Continental Army fled across New Jersey from the pursuing British until it crossed the Delaware River into Pennsylvania. By carefully confiscating all the boats for 70 miles up and down the river, George Washington was able to stop the British from following them into Pennsylvania. In December, Washington would turn the tables on the British with his victory at Trenton and in Princeton a few days later. These victories gave much needed encouragement to the American soldiers who had suffered such a string of defeats. They would need it for the war which was to come, a war which would stretch on for another six years.