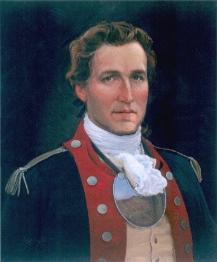 On this day in history, February 13, 1818, General George Rogers Clark dies. Clark was called the "Conqueror of the Old Northwest," for his military exploits. Clark made his first surveying trip into Kentucky in 1772, when settlers were pouring into the region. Lord Dunmore's War soon broke out with the Indians and Clark became a captain in the war, which ended with the Indians agreeing to recognize the Ohio River as their southern boundary.

Just as the American Revolution broke out, Kentuckians were involved in a disagreement with Richard Henderson of North Carolina, who planned to start a new colony in the area known as Transylvania. Many of the settlers were not in agreement with Henderson's plans so they elected Clark to go to Virginia to persuade Governor Patrick Henry to partition Kentucky. Henry agreed to this and created Kentucky County, Virginia, making the 24 year old Clark a major of the Kentucky County militia.

As the Revolution progressed, some of the Indians who had lost their territory in Kentucky allied with England. British Governor Henry Hamilton in Detroit began sponsoring Indian raids south of the Ohio. Clark secured Henry's support for capturing the British outposts that were supporting the raids and in 1778, he and 175 men marched north of the Ohio and took several British posts and Indian villages, including Vincennes, within a matter of days. Hamilton personally led a march that retook Vincennes shortly after. 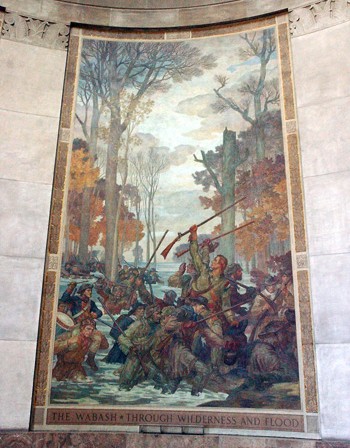 Wabash: Through Wilderness and Flood by Ezra Winter This is one of 7 murals inside the George Rogers Clark Memorial in Vincennes, Indiana. This painting depicts Clark's trek to capture Vincennes in 1779.

In February, 1779, Clark made an epic winter trek through the wilderness to recapture Vincennes, which he did. Hamilton was captured, Clark was viewed as a hero throughout the colonies and the Indians feared even the mention of Clark's name. Virginia claimed the territory and called it Illinois County. Clark was promoted to Brigadier General by new Virginia Governor Thomas Jefferson and would go on to plan several attacks on Detroit, which never came to pass. He then led an expedition into Ohio against several Indian towns that proved to be the last expedition of the American Revolution.

After the war, Clark led one of the first expeditions of the Northwest Indian War in 1785, but it failed due to a mutiny. Clark was accused of being drunk on the job and was forced to resign. He would never serve in the military again. He spent most of his remaining years in Louisville, Kentucky, which he founded, and Clarksville, Indiana, which was named after him, serving as an advisor to governors and city councils and acting as a negotiator with Indians.

Clark fell into deep debt and, in 1793, to remedy his financial woes, made a deal with French Ambassador Edmond-Charles Genet to raise an army to drive Spain out of the Mississippi River valley. President George Washington put a stop to this, however, by issuing a warrant for Clark's arrest. Kentucky Governor Isaac Shelby refused to arrest Clark, but Genet was recalled to France and the plan dissolved.

Clark lived his last years with his brother-in-law near Louisville after a severe accident caused a leg amputation. He died February 13, 1818. Virginia did finally vote to reimburse some of his war expenses to his estate, but not until several years after his death.