On this day in history, April 30, 1789, George Washington is inaugurated the first President of the United States. Washington was informed by Congress on April 14th that he was unanimously elected as the first president. Two days later he left for New York City, the first seat of the US government. As he traveled, he was greeted in each city along with the way by cheering crowds, the tolls of church bells and flowers thrown by grateful admirers.

Washington sailed from New Jersey on April 23rd in a specially decorated barge, accompanied with other dignitaries and numerous smaller boats. They arrived at Murray's Wharf in New York City to a great throng assembled to greet him. Governor George Clinton then escorted Washington to the house where he would be staying. 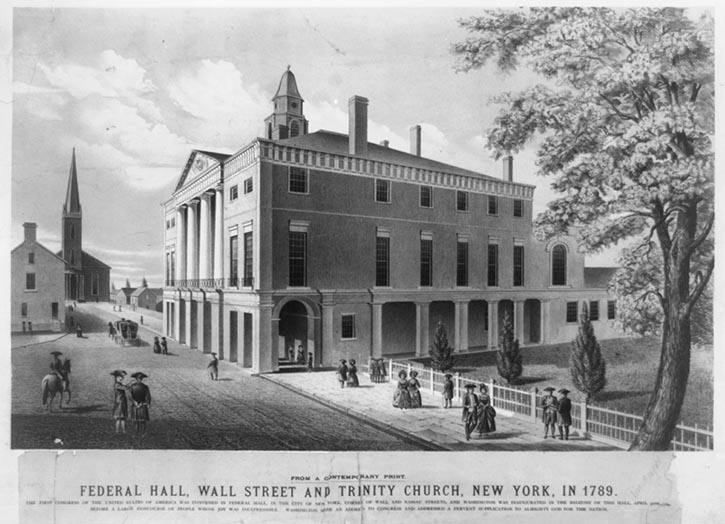 On April 30, Washington walked to Federal Hall on Wall Street. The building was New York's City Hall and had been the meeting place of the Stamp Act Congress in 1765 and of the Confederation Congress from 1785-1789. Washington walked up to the second floor balcony for the inauguration, overlooking a crowd of 10,000 people. The entirety of the First Congress sat on a platform facing the balcony.

On the balcony, Samuel Otis, the Secretary of the Senate, held a red velvet cushion with a Bible open on it. Vice-President John Adams, who had already been sworn in a few days earlier, stood to the side. John Jay, who was then the Confederation Congress' Secretary of State, Generals Henry Knox and Philip Schuyler and others graced the balcony as well. 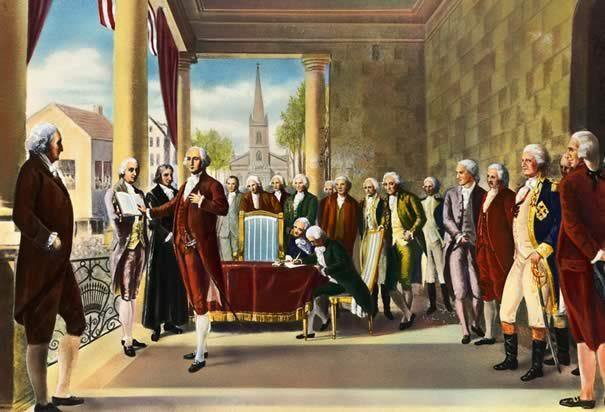 New York's Chancellor Robert Livingston, the highest judge in New York, administered the oath of office to Washington because no Supreme Court justices were yet appointed. Washington placed his left hand on the open Bible and raised his right hand as he made the oath prescribed in the Constitution. When he finished, by his own volition, he leaned down and kissed the Bible and added, "So help me God." At this point, Chancellor Livingston turned to the crowd, said, "It is done!" and "Long live George Washington – the first President of the United States!," to the cheering crowd.

Washington then entered the Senate Chamber and addressed both houses of Congress with a short speech in which he talked about his own inability to perform the office and desire to be back at Mount Vernon, his desire that each of them think of the country as a whole and not simply their own districts and made numerous references to God's hand in establishing the United States and their dependence on Him for future prosperity. He also informs them that he will not take any pay from them for serving as President.

After addressing the Congress, Washington, Adams and the rest of Congress walked down Broadway to St. Paul's Chapel to pray for the new nation, take communion and hear a sermon preached by the Reverend Samuel Provost, who was chosen as the Senate's first chaplain. The prayer service was scheduled by an Act of Congress a few days before the inauguration. This is the same Saint Paul's Chapel that survived the terrorist attacks of 9/11 at the foot of the World Trade Center.

After the inauguration, George Washington was entertained at a lavish dinner put on by Governor Clinton and in the evening, fireworks and cannon balls were shot over the city in celebration of the new nation and her first president.