On this day in history, April 8, 1782, Lieutenant Joshua Barney wins the Battle of Delaware Bay. Barney was only 23 years old in 1782 and had already been captured 5 times by the British, even once escaping from the notorious Old Mill Prison in Plymouth. Upon returning to America, he was given command of a small fleet of privateers which were to escort several merchant ships into the Delaware Bay.

Barney commanded the Hyder Ally, the most powerful of the ships, with 16 6-pound cannons (meaning they shot six pound cannonballs). On April 7, low winds forced the fleet to drop its anchors just inside Cape May. During the night, the 32-gun HMS Quebec and the 24-fun HMS General Monk spotted the fleet and prepared to attack in the morning. 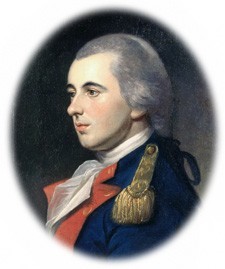 In the morning, the British were joined by the privateer Fair American for the attack. Around 10 am, the Americans noticed the British and Lieutenant Barney ordered the merchant ships up the bay. He ordered the Charming Sally and General Greene to follow close by the shoreline to prevent the heavier British ships from catching them. 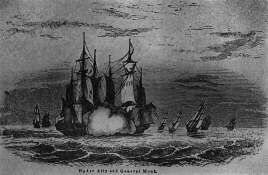 Joshua Barney was awarded command of the General Monk for his bravery and sent with dispatches for Ben Franklin in France. After the war, he became a privateer for the French Navy. Later, during the War of 1812, Barney was granted a letter-of-marque to operate a privateer against the British Navy. When the British blockaded the Chesapeake in 1814, Barney was given command of the Chesapeake Flotilla of small boats and barges to protect Baltimore and the capital. When the fleet was overrun, Barney sank the boats and took the cannons overland to join in the defense of Washington DC. The poorly prepared Americans quickly fled the capital, except for Barney and his men. They inflicted heavy damage on the approaching British before their final retreat, leaving the way open for the British to invade and destroy much of the city.